After experimenting with several different formulas for organic weed killer, I’m sharing the one that’s worked best for me! Super easy with only two simple ingredients!

Living in Connecticut where the summers are fairly mild, we tend to get just the right amount of rain, sun, and shade for our landscaping to thrive. But unfortunately the weeds thrive too – it’s a constant battle to keep them in check. In our previous home in Ohio, I grabbed weed killer off the shelf at our local hardware store and used that but now I’m much more leery of using harsh chemicals on our lawn since we have well water and have also become more environmentally conscious. Over the past several years I’ve experimented with several different formulas for organic weed killer and thought I’d share the spray that’s worked best for me. (post includes affiliate links – see my full disclosure statement {here}) 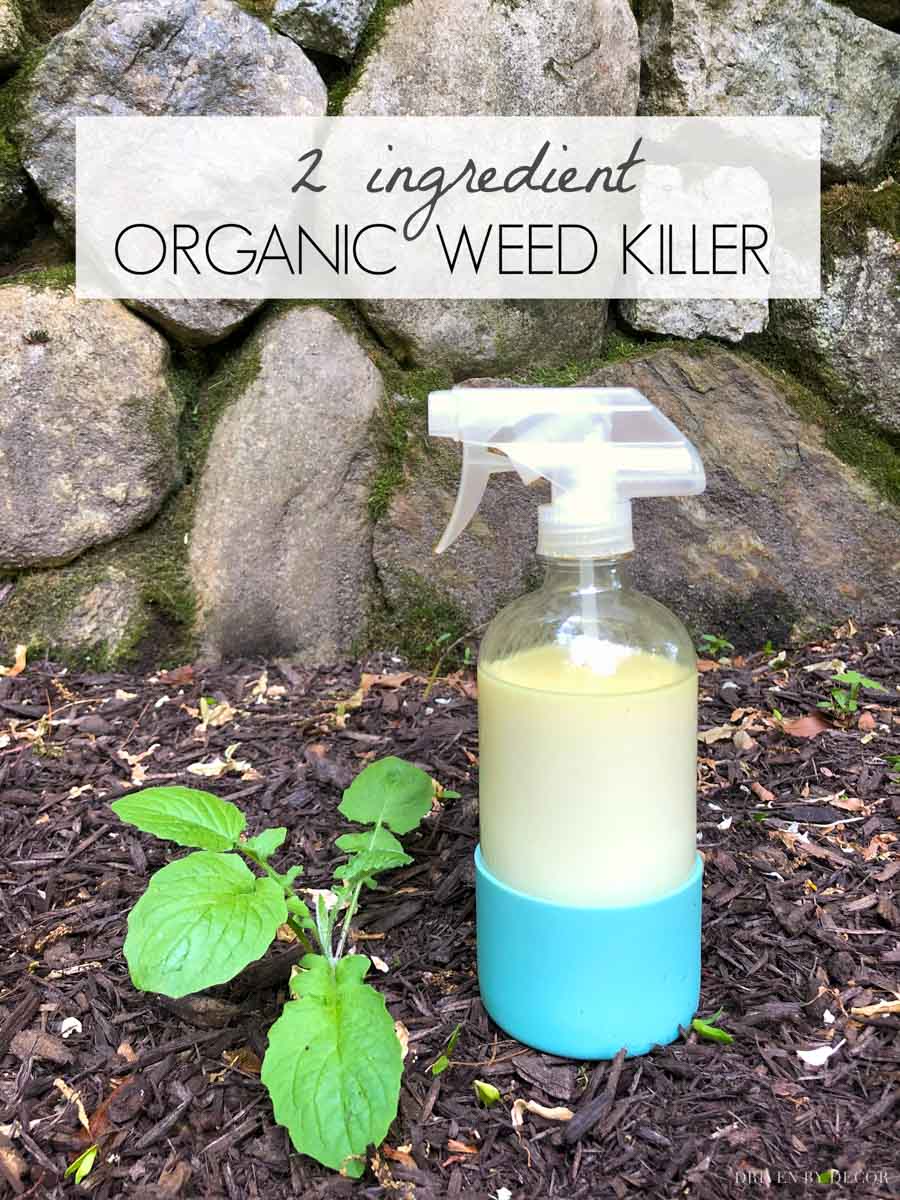 The ingredients for the organic weed killer I use and love is super simple – it requires only two ingredients: 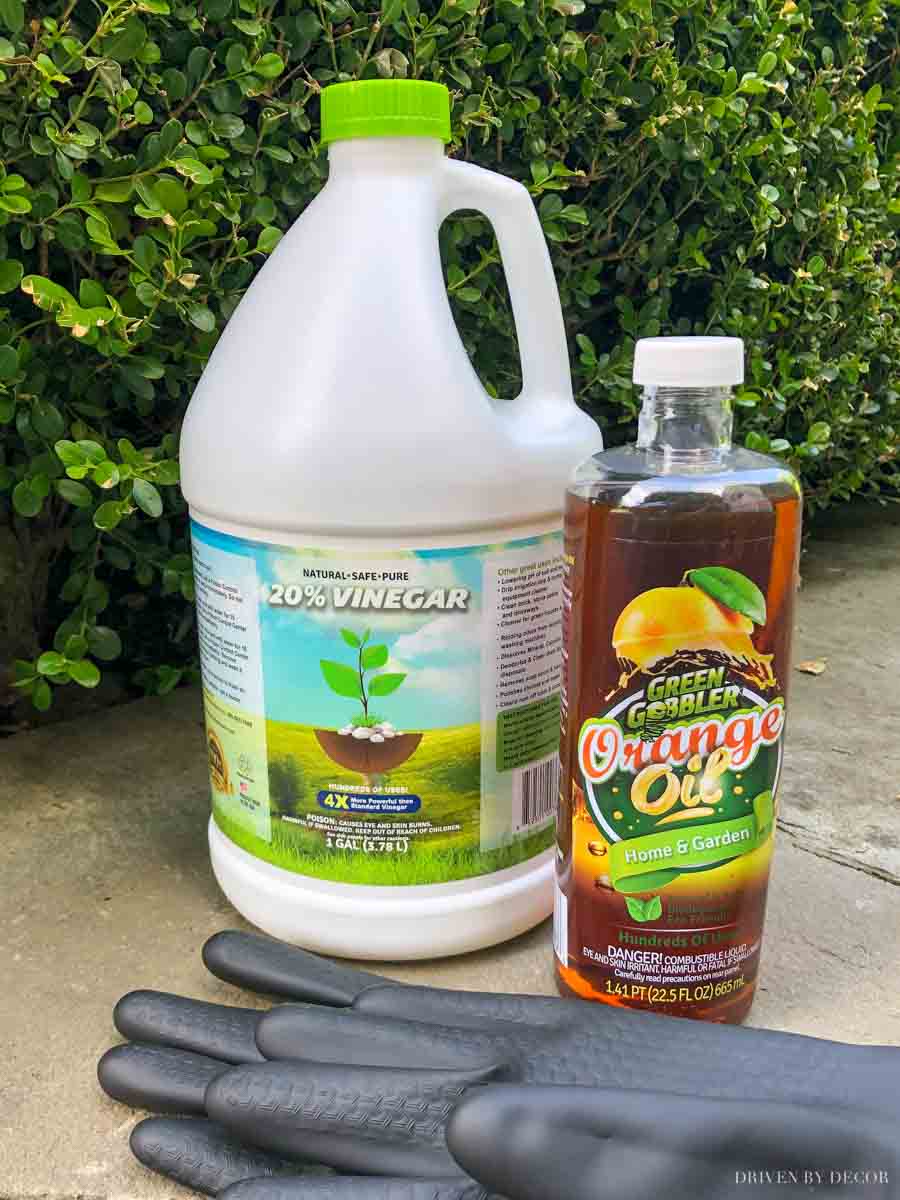 Before sharing the recipe that I use and how I mix it, be aware that 20% vinegar is potent (that’s how it kills those weeds so well!) and can burn your eyes and skin. Read all precautions on the label before using it and wear goggles, protective clothing, and gloves (I use {these gloves} that are chemical resistant) when mixing and applying. The ratio that I use of these two ingredients is approximately 1 gallon of 20% vinegar to 1 cup of orange oil concentrate. To mix it, I simply remove about 1 cup of vinegar from the new gallon, add 1 cup of orange oil concentrate to it and mix well. Then I add the mix to a glass spray bottle (I recommend glass spray bottles such as {these} or another type of heavy duty spray bottle since over time the 20% vinegar can eat away at typical spray bottles and containers). Keep people and pets away from any weeds you’ve sprayed until the spray has dried due to the concerns mentioned above with direct contact with high strength vinegar. If you won’t be using the spray frequently, once you’re done spraying, remove the sprayer from your bottle, rinse it, and cap the bottle to keep the sprayer from corroding over time.

Option 2: If you’re not comfortable with using 20% vinegar due to the precautions that must be taken, another option for weed killer is one using ingredients you probably already have in your pantry including store-bought white vinegar, salt, and dishwashing liquid. Fill an empty 32 oz. spray bottle most of the way with white vinegar, add 1/4 cup table salt and stir until dissolved, mix in 2 teaspoons of liquid dishwashing soap like Dawn, and shake well. This is the mix that I used up until last year and it was effective on most weeds but (1) it’s not truly organic since it involves using dish detergent (2) the salt in the mix kills the good microbes in the soil and too much use of it can keep plants from growing in that spot for years to come which could be an issue if you want to plant in that same area the future and (3) it’s not nearly as quick and effective as the 20% vinegar + orange oil concentrate. So while using the 20% vinegar is a bit more of a pain because you have to take care when mixing and using it, for me it’s been the better way to go.

Like all weed sprays, organic weed killer works best when you spray the weeds on a warm, sunny day when it hasn’t recently rained and there’s no rain in the forecast for the next day or two. And it will kill grass along with the weeds so be sure you’re targeted with your spraying. If you’re spraying near other plants that you want to keep safe, one simple tip is to grab a piece of cardboard to shield the plant from any errant spray. 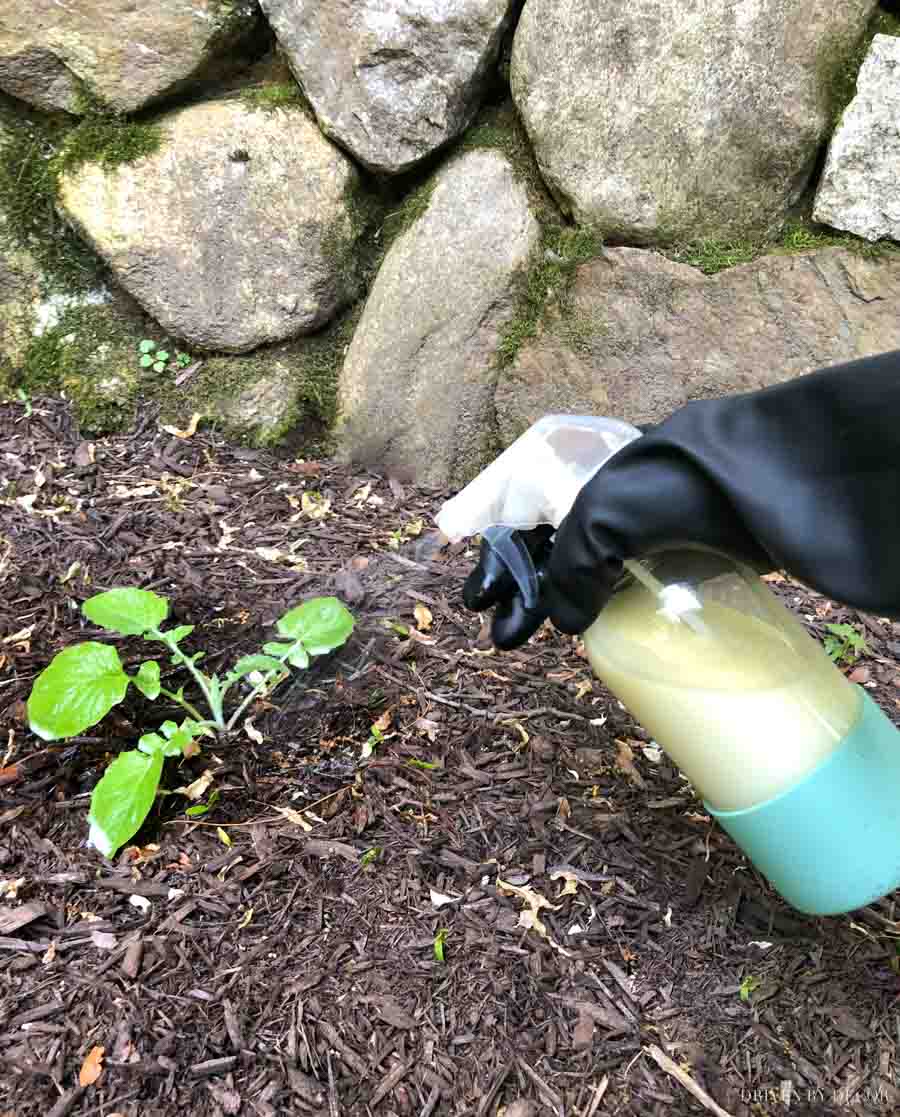 But Does It Work??

Yes! Studies on various organic weed killers have shown that none of them are quite as effective long-term as the harsh chemical weed killers but this spray truly does do a really good job. And it definitely gives me some piece of mind about harmful chemicals getting into our drinking water. I also like that I don’t have to worry about my girls and our dog being exposed to harsh chemicals when playing in our yard.

Another Option for Organic Weed Control

If you don’t want to use a spray, go for the old fashioned kind of organic weed control and pull them! Weeding while crouching down and kneeling is ROUGH but there’s a weed fighting tool that I bought since moving here that I seriously couldn’t live without.  It’s Fiskar’s Uproot Weed and Root Remover available {here} and I love it because it’s made to use while standing up (and it’s fun – even my girls don’t mind doing a little weeding with it). It has four stainless steel claws arranged in a circle that you push down into the ground around the weed: 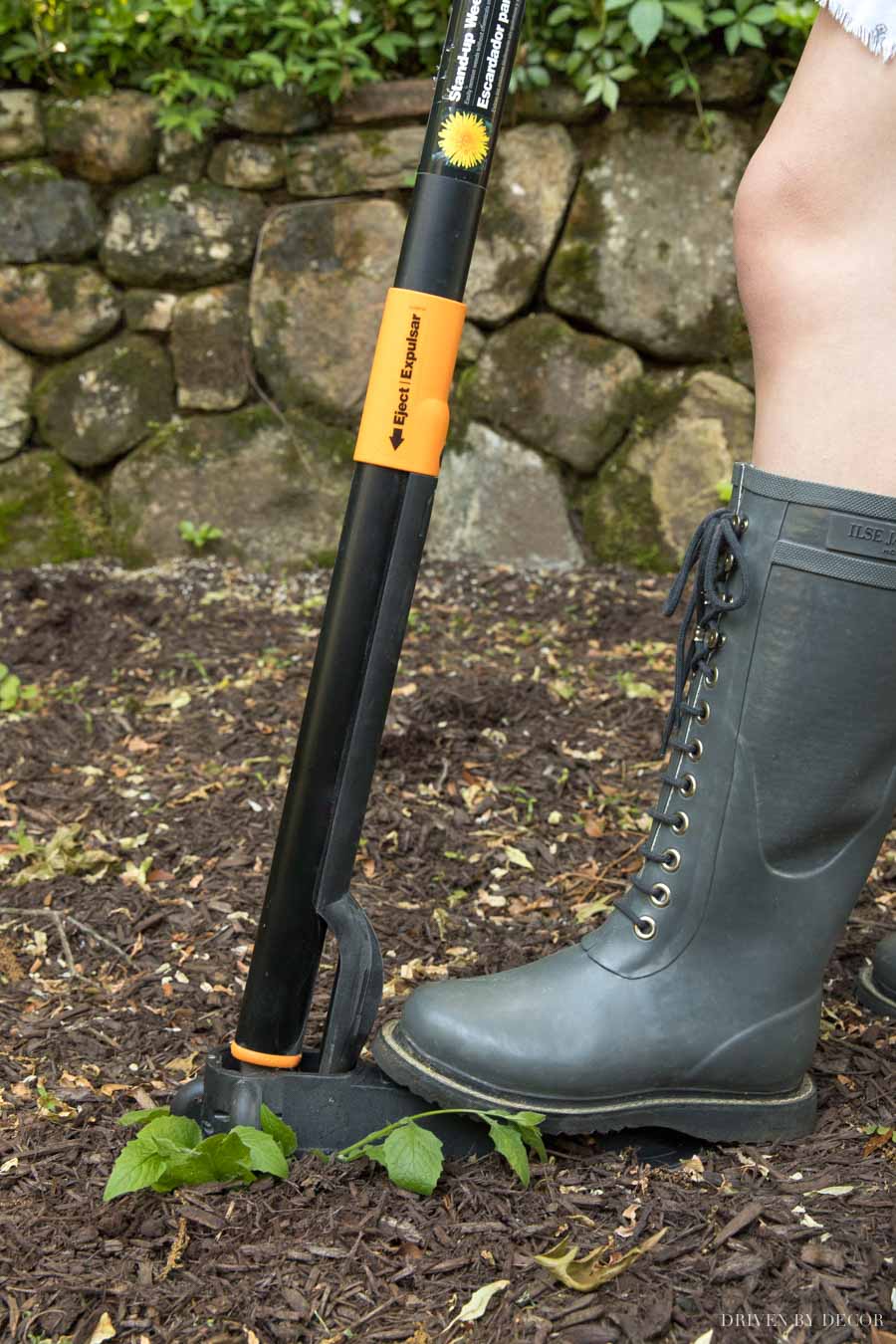 Then you step on the foot rest, lean the weeder back, and it pulls up the weed, root and all! 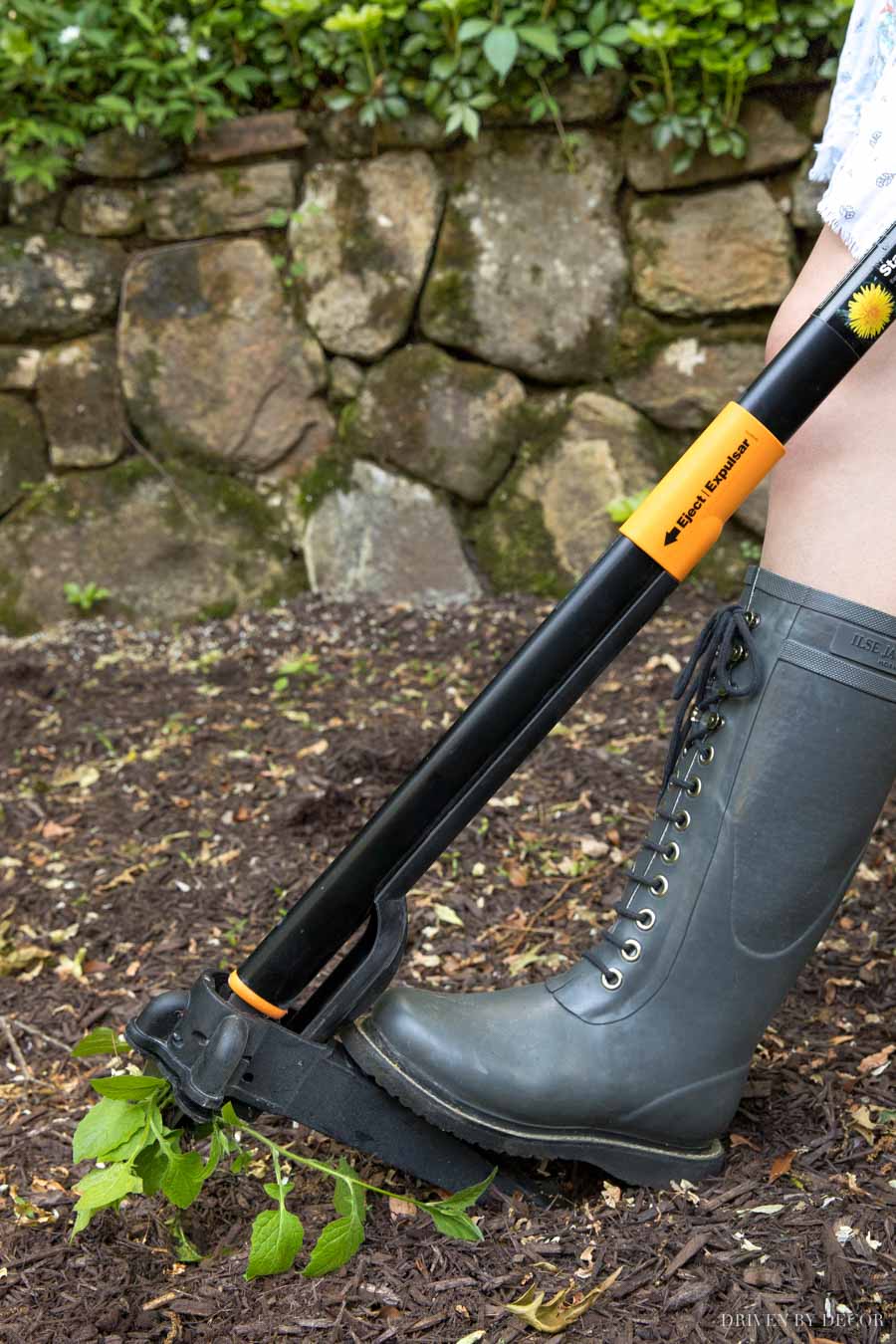 You can then just push the eject mechanism on the handle and the pulled weed is ejected from the tool. Sooo much better than kneeling or bending down for hours to weed! For the weeding around our house, I use this tool for bigger weeds like dandelions and then spray the smaller weeds with my organic weed spray.

Hope that helps those of you trying to get your lawns in shape this season! I sprayed a bunch of our weeds yesterday and we’re busy this weekend getting our patio area spruced up and ready for all of our visitors that are coming this week. Our oldest daughter graduates on Saturday so my parents and Jeff’s dad are coming to visit and celebrate the occasion with us! I bought some new patio furniture over Memorial Day weekend that we’re going to put together later today – I’ll let you know how it turns out! Enjoy the rest of your weekend! 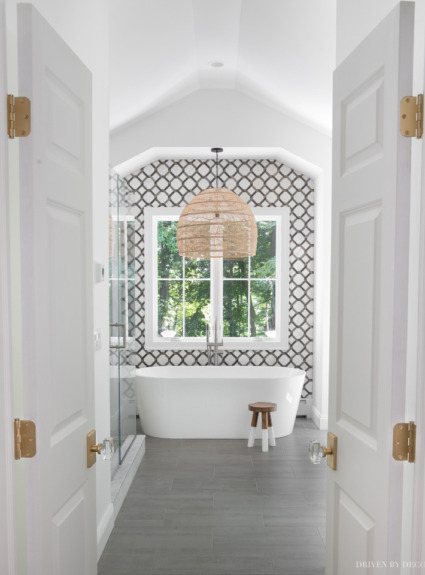 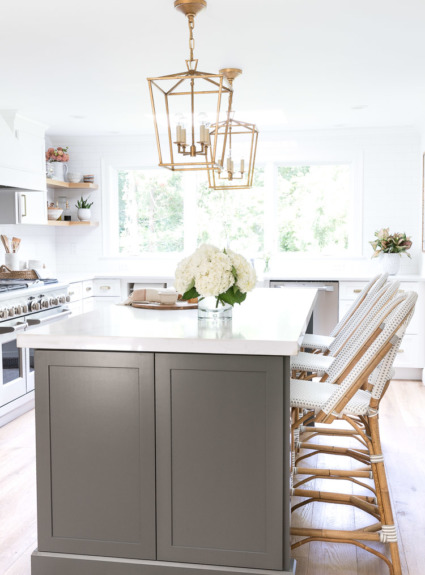