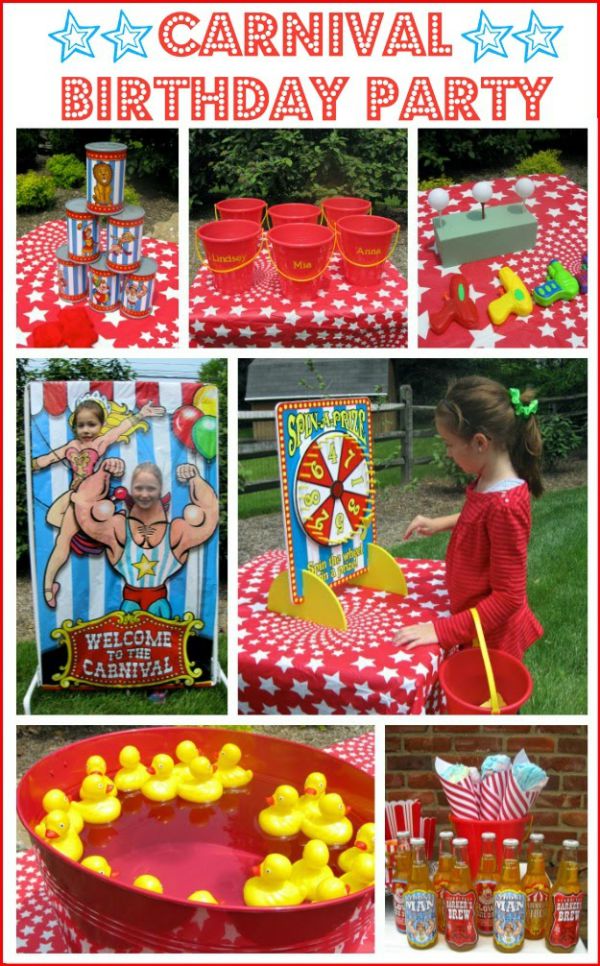 For invitations, we found the perfect ones on Etsy: 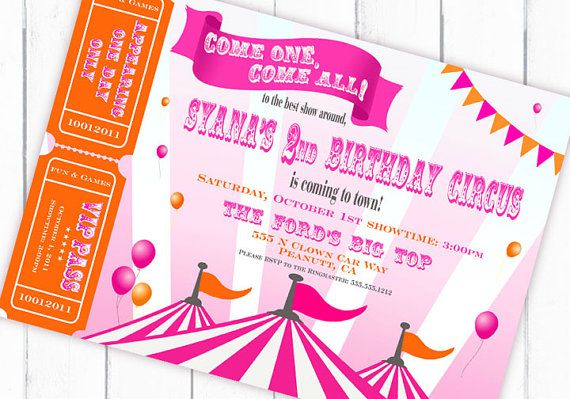 I love Etsy for invitations because you can get the perfect personalized invitations at reasonable prices. Some sellers create invitations that they mail to you while others provide you with a digital file of the invitation that you can print yourself. You can browse their large selection of circus / carnival themed invitations {here}.

at {here}. The invite also comes in blue and red color combo if you’re looking for something less girly:

I originally planned to make all of the games for the party myself but then found some really cute carnival games online at prices that weren’t much more than the cost of supplies if I made them myself. For each game that we set up, there was an opportunity to win tickets which were then redeemable for prizes from the prize table. The girls were given buckets with their names on them to hold both their tickets and their loot.

We placed inexpensive red and white plastic tablecloths on card tables in the backyard where we set up the games, a prize table, and a treat table. The exact tablecloths I used are no longer available but {these red and white striped tablecloths} would be perfect. 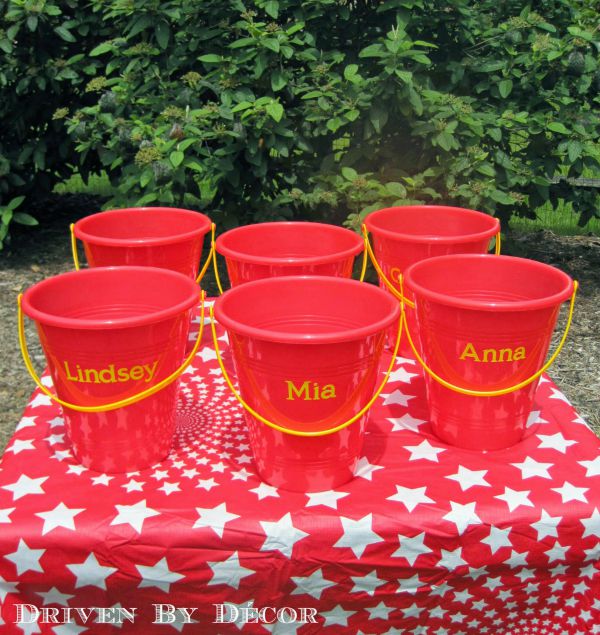 The six games we played included:

I bought {this disk drop game} that’s just like Plinko on The Price is Right, only smaller. The girls were each given several wood disks to drop from the top of the board with a goal of getting them to fall in the bottom slots with the highest numbers. They won the same number of tickets as the highest number slot that the disks landed in. 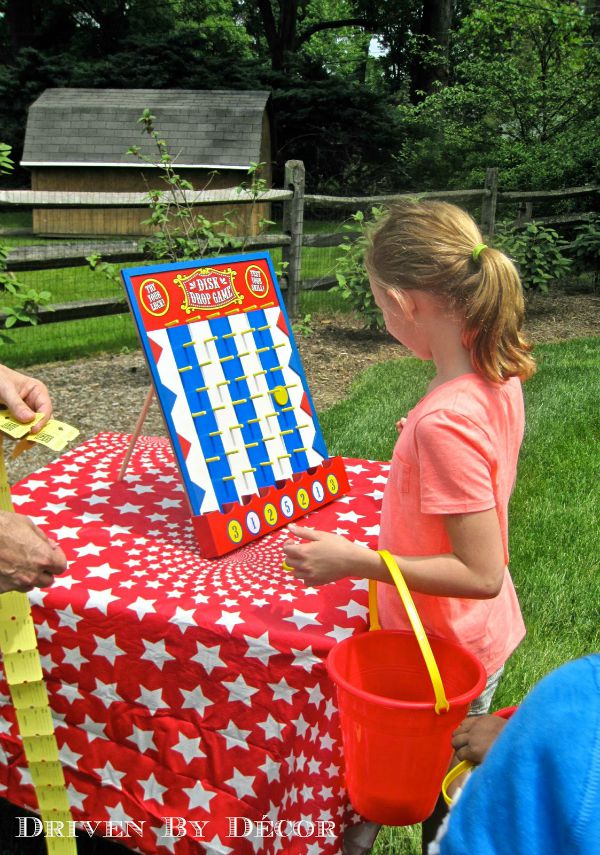 You can find a similar carnival can bean bag toss to the one I used {here}. Each of the girls got two turns using three bean bags per turn to knock down the tower of cans. They got a ticket for each can that they knocked down. 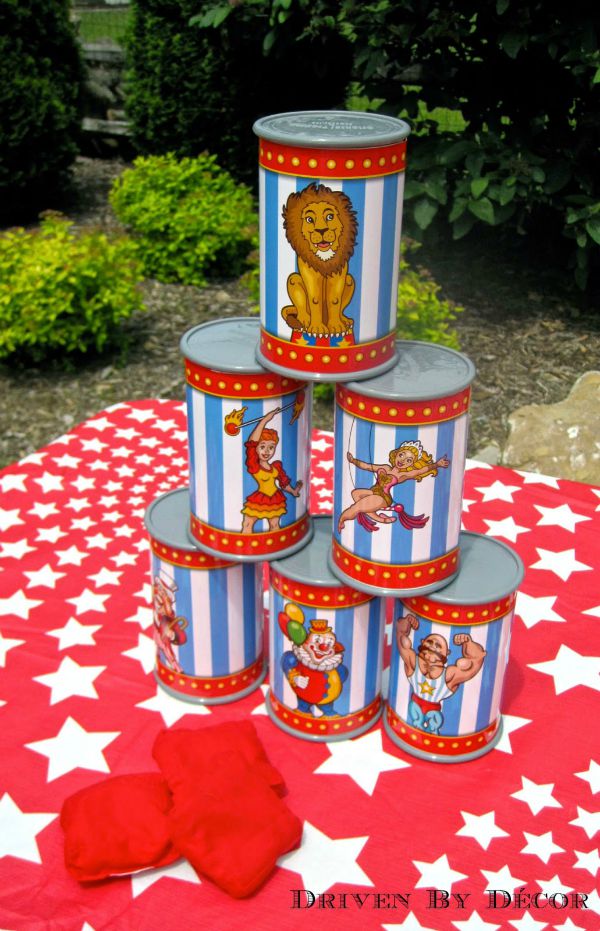 This was one of the two simple games that I made myself. I simply stuck a few golf tees into a foam block such as {these} and placed ping pong balls on top of each tee. The girls picked a water gun and competed against each other to see who could shoot down their ping pong ball first. Five tickets were given to the first person to shoot off their ping pong ball and three tickets to the second. 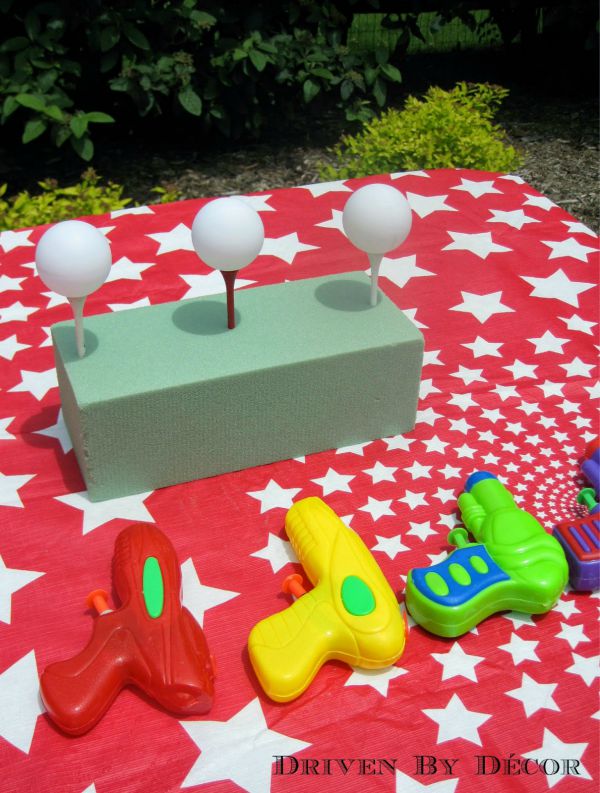 I filled a red galvanized tub similar to {this one} with a set of 20 rubber ducks with printed numbers on the bottom of them that you can find {here}). The girls picked two ducks at a time and checked to see if they had matching numbers on the bottom. They got a certain number of turns and earned a ticket for each match that they made. 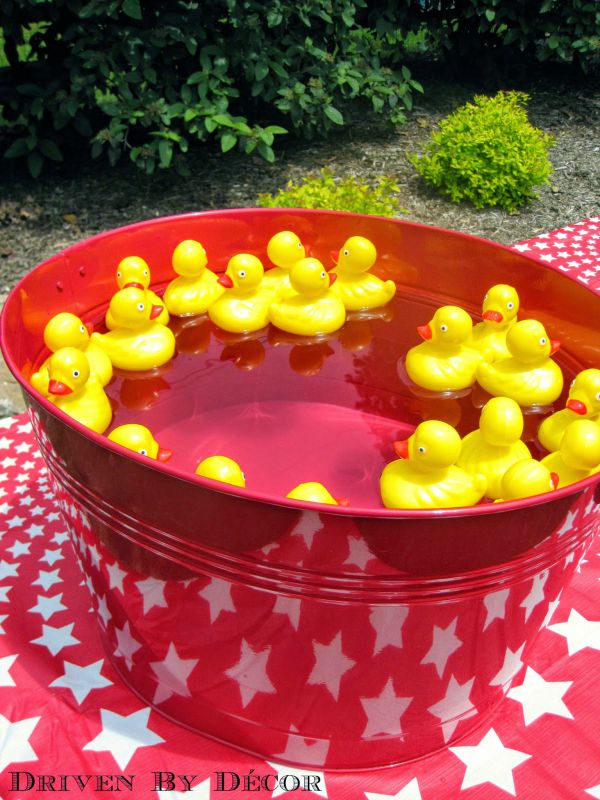 Next they got to spin a carnival wheel (you can find a similar one {here}). This was a party favorite! Each of the girls got a certain number of spins at the wheel and they earned the number of tickets of the highest number that they spun. 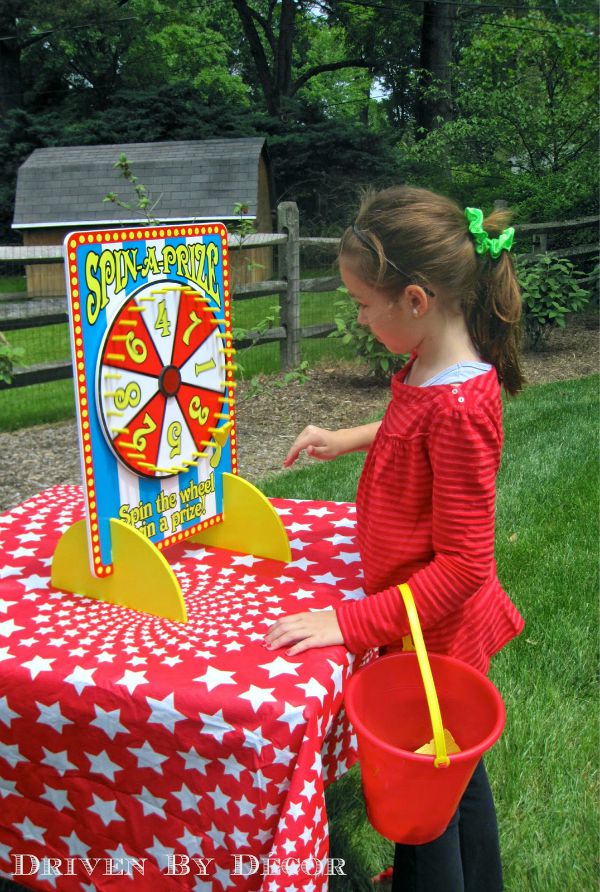 A lollipop tree was my other simple DIY game (which I forgot to take a picture of!). I bought a bag of blow pops and colored a few of the ends blue and a few of the ends green. The lollipops were stuck into a foam block and the girls got to pick two lollipops off of the “tree”. They were rewarded with five tickets for blue tipped lollipops and three for green tipped ones. And of course, they got to keep their lollipops 🙂

In addition to the games, we had a Carnival Photo Backdrop found {here}. I taped the plastic backdrop to a rolling clothes rack and took pictures of the girls posing as a trapeze artist and muscle man. I made sure to get a picture of my daughter with each of her friends so that I could include a copy of it with their thank-you cards. 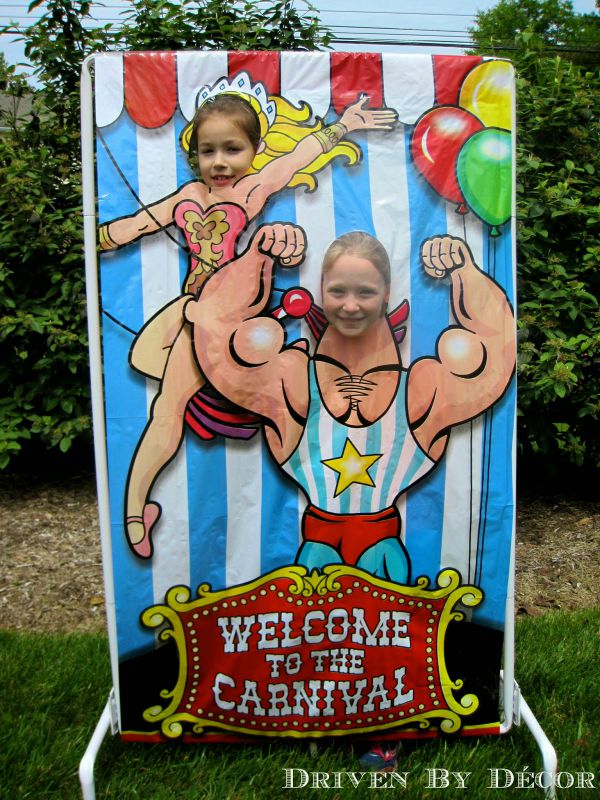 After the girls were done playing the games and posing for photos, we raffled off the grand prize, which was a large stuffed animal dog. Then we headed over to the prize table. Each of the prizes had a mini easel next to it that held a card showing the number of tickets needed to “buy” it . 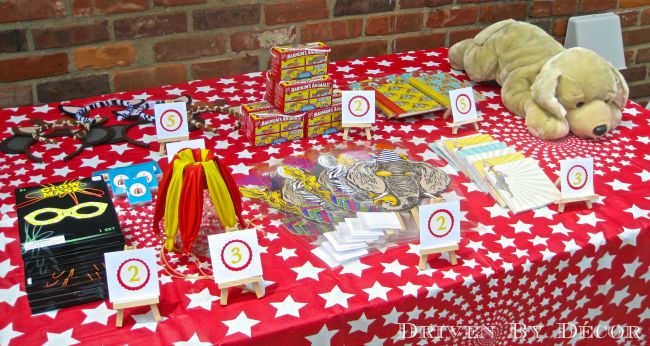 They lined up and took turns picking out their prizes, which were all from the dollar bins of either Target or Michaels. The prizes also served as their party favors. 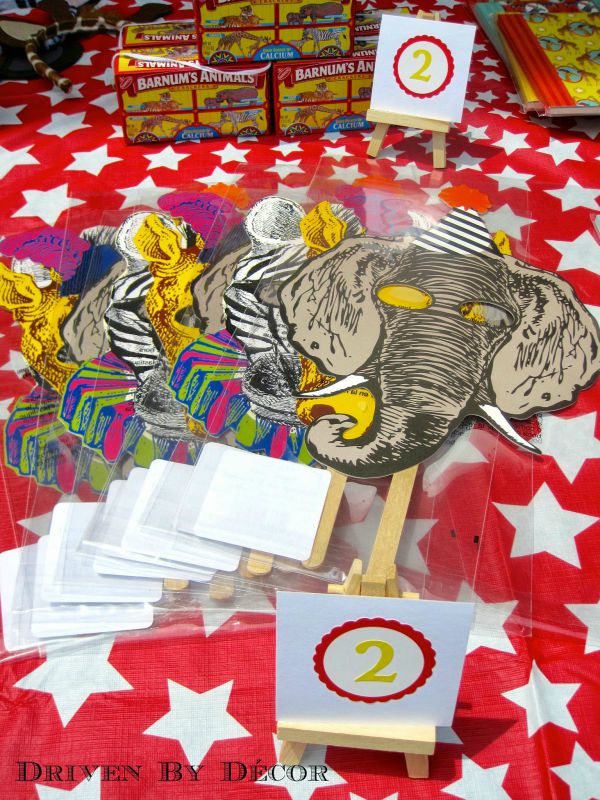 These punch balloons surprisingly ended up being the biggest hit: 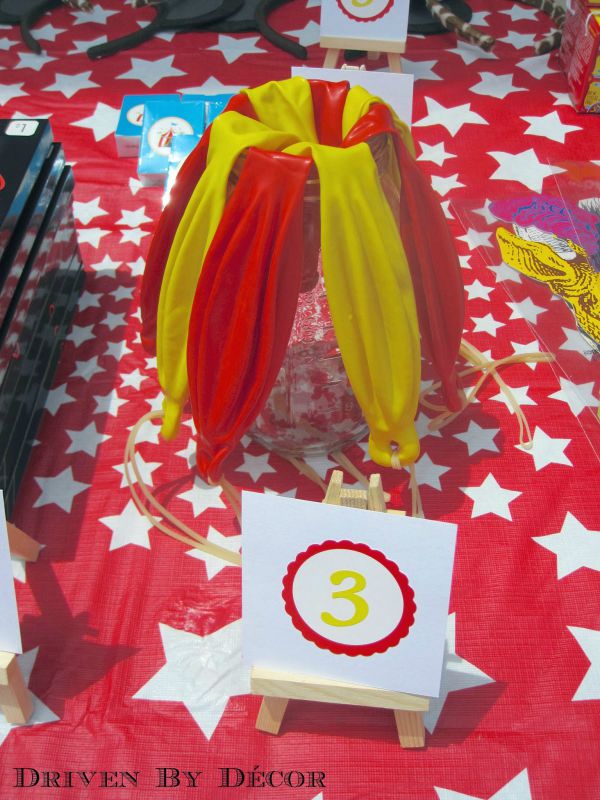 Of course, a circus isn’t a circus without gorging yourself on treats! We had a treat station that included candy peanuts in {these “Time for a Treat” bags} (I cut them down a bit to a shorter size), popcorn in tall scalloped favor boxes, and cotton candy in cones that I made from rolled sheets of red & white scrapbook paper. 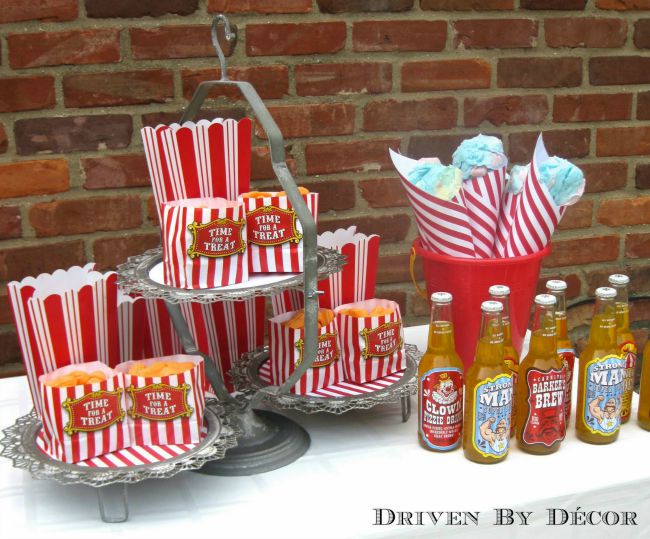 They washed down all of the sugar with Izzie drinks covered with carnival drink bottle labels: 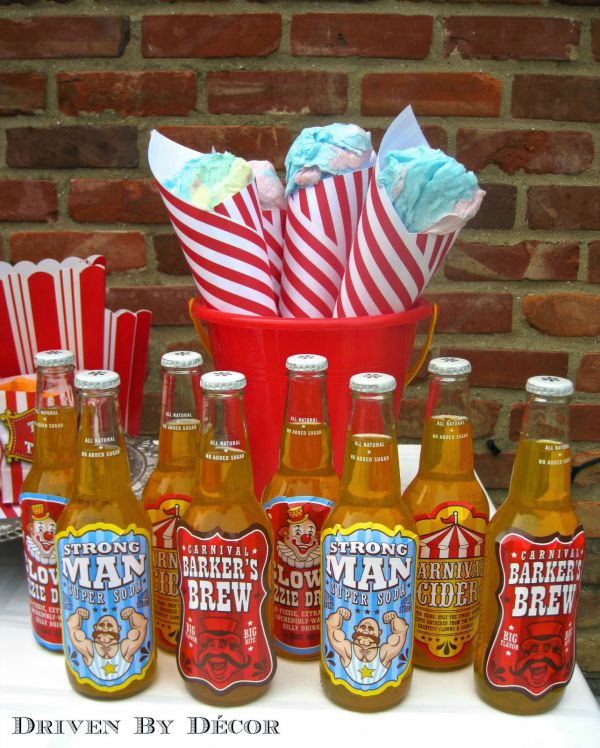 You could use {these cute carnival themed wraps} on water bottles too.

All of the girls (including the adorable circus dog) really enjoyed the party! 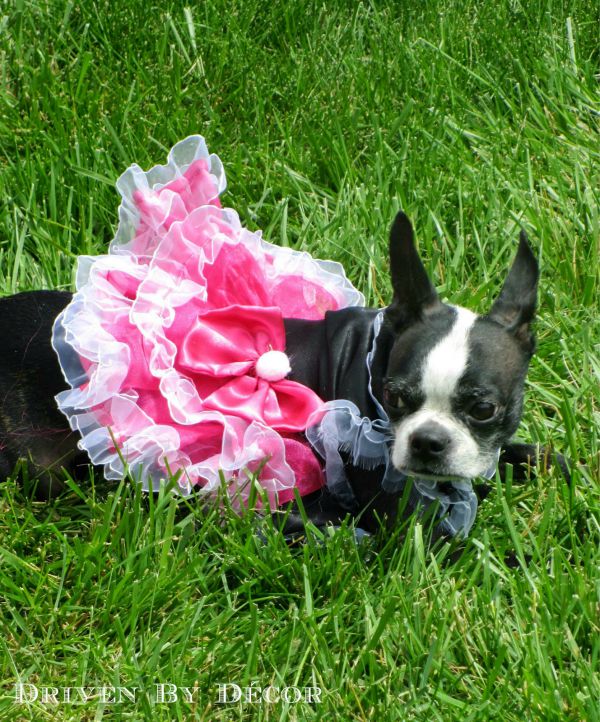 Good luck with your party planning!!