Looking for the best fluffy duvet insert? One that’s plush and lofty without being too hot? You just have to know what to look for! I’m sharing the 7 things to look for in a duvet to get the fluffy, hotel-like bed of your dreams!

Pretty much every time I share pics of one of our bedrooms someone asks “How do you make your bed look so fluffy?”. And the answer is that the magic lies in the duvet insert! Not all duvet inserts are created equally and after years of making way too many mistakes buying the wrong ones, I’ve figured out the key features to look for to find the best duvet inserts. So today I’m putting everything I’ve learned together and sharing the seven things to look for when shopping for one so you can be a duvet insert shopping ninja too 🙌🏻. Many thanks to The Company Store (a go-to source for long lasting, comfy, & high quality bedding) for partnering with me on this post! (post includes affiliate links; full disclosure statement available {here})

1. Down Filled (vs. Synthetic Materials)

The fill material for a duvet insert definitely matters! Duvet inserts filled with down tend to be more fluffy, breathable, and lighter weight than those filled with synthetic materials like microfiber. Just as I believe in investing in quality down inserts for decorative pillows vs. the cheap polyester ones, I feel the same about investing in down duvet inserts. A good quality down duvet insert will last many years and you can give your bed a whole new look by simply swapping out the duvet cover while keeping the same quality insert.

I highly recommend {this Legends Hotel Alberta Down Insert} that I have on our guest bed in the medium weight – so nice and fluffy (and yes, it ticks all 7 boxes I’ll be talking about!): 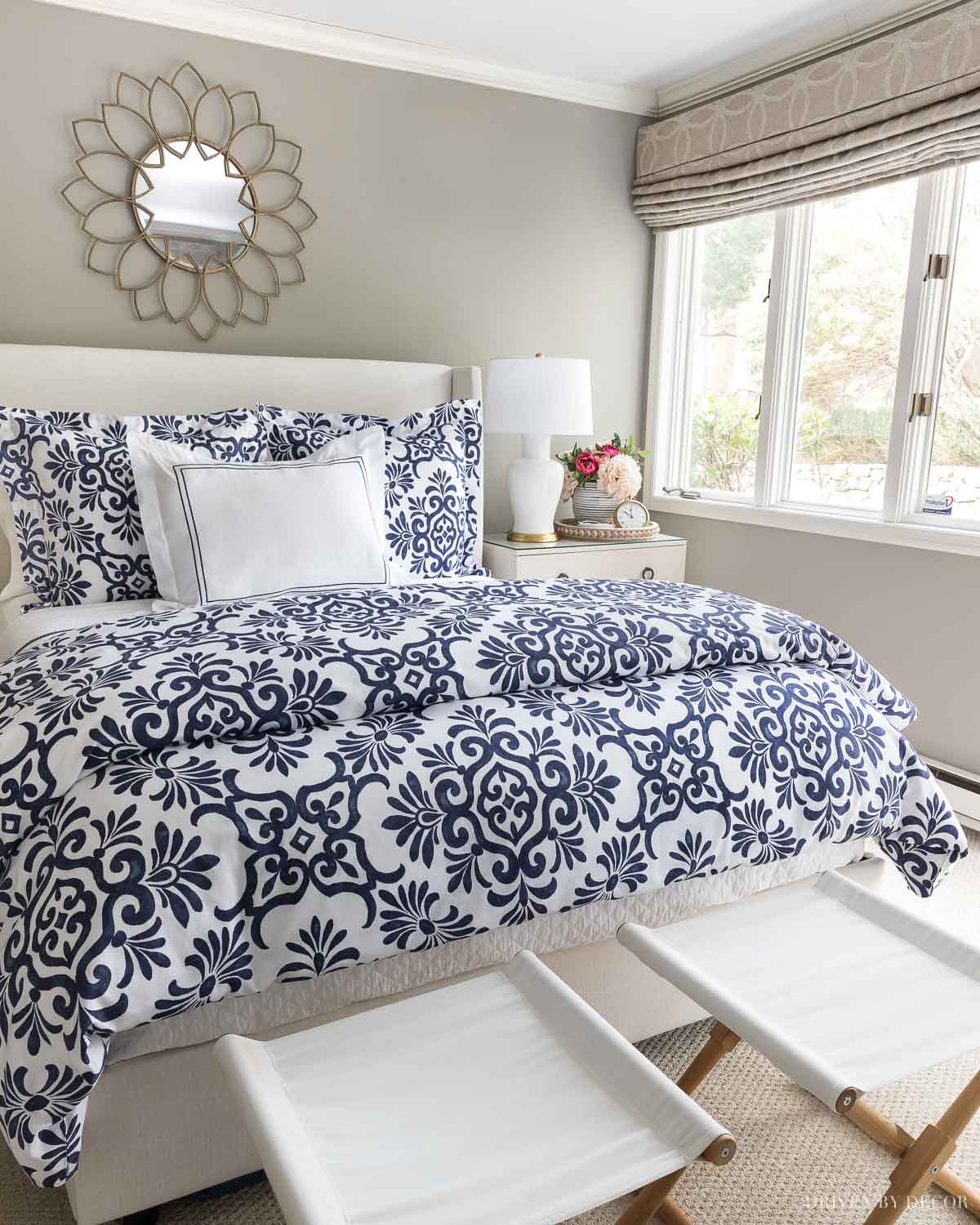 As far as the type of down used, don’t get too hung up on that because the fill power will tell you what you need to know (more on that next!). The Company Store has inserts with premium down, European down, and Hungarian goose down, all which have been certified under the Responsible Down Standard (RDS). This certification is another thing to look for to ensure the down is ethically sourced.

Wondering what the difference is between a down duvet insert and a down comforter? While some use the two terms interchangeably, a down duvet insert is designed to be paired with a cover while a comforter doesn’t need a cover. Comforters are designed to be washed more frequently (duvet inserts don’t need to be washed frequently since you can simply wash the cover) so they usually don’t have the same quality fill and aren’t as fluffy. What I love about duvet inserts is that you can invest in a quality insert that you have for many years and simply change up the cover when you’re ready for a new look!

One of the most important things to consider when you’re searching for the best duvet insert is the fill power since it’s a measure of the quality of the down. Fill power is not the amount of down that’s put into the duvet insert, it’s how large the down cluster is. The higher the fill power, the bigger the down cluster and the lighter and fluffier the duvet insert. If you’ve ever complained about a duvet that was too heavy, it’s probably because it was a poor quality synthetic fill or it was down with a low fill power! 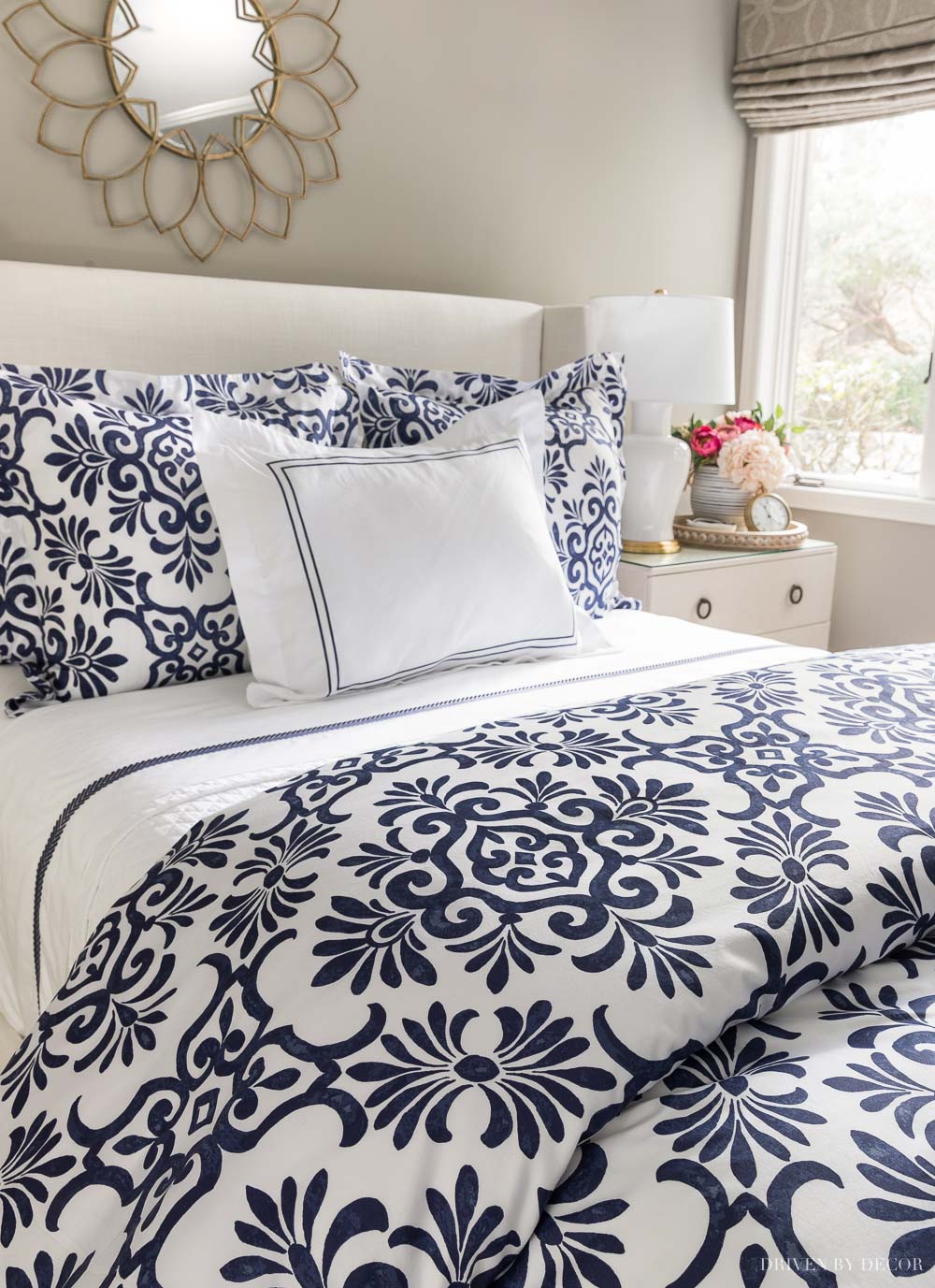 Once you’ve decided on a specific duvet insert based on the fill power, The Company Store has different warmth options – these all have the same fill power (same size down clusters) but the warmer duvet inserts have a higher fill weight, meaning that they are filled with more ounces of down. A fluffy, full duvet doesn’t have to mean that it’s suffocatingly hot – even hot sleepers can find a duvet that’s right for them! iIf you want a duvet that’s fluffy but not hot, look for a high fill power but low fill weight. 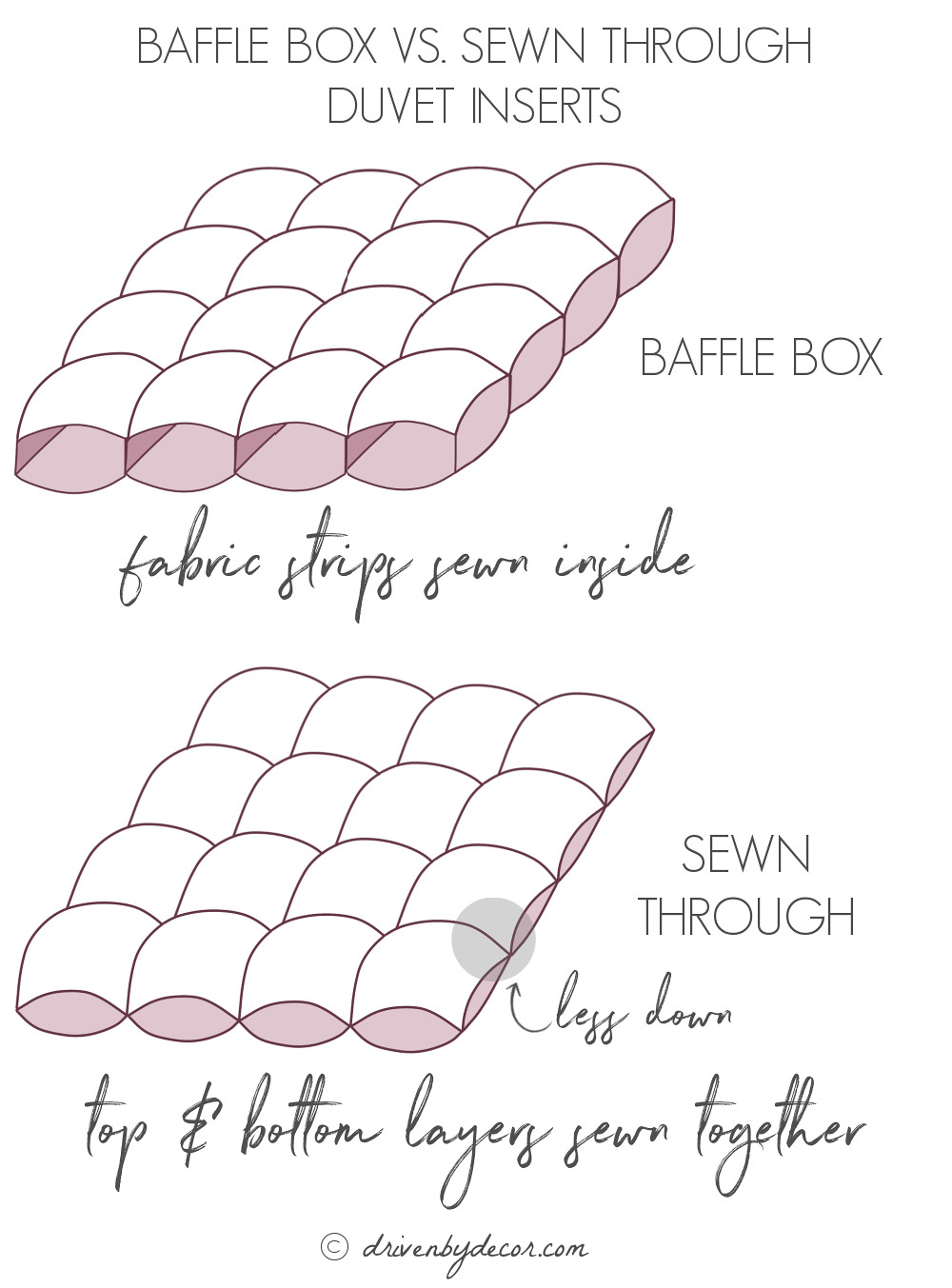 With baffle box construction, there is a strip of fabric sewn between the top and bottom layers of the duvet insert to create a box for the down. The down fill is evenly distributed across the entire comforter and you get more loft (so it’s nice and fluffy!): 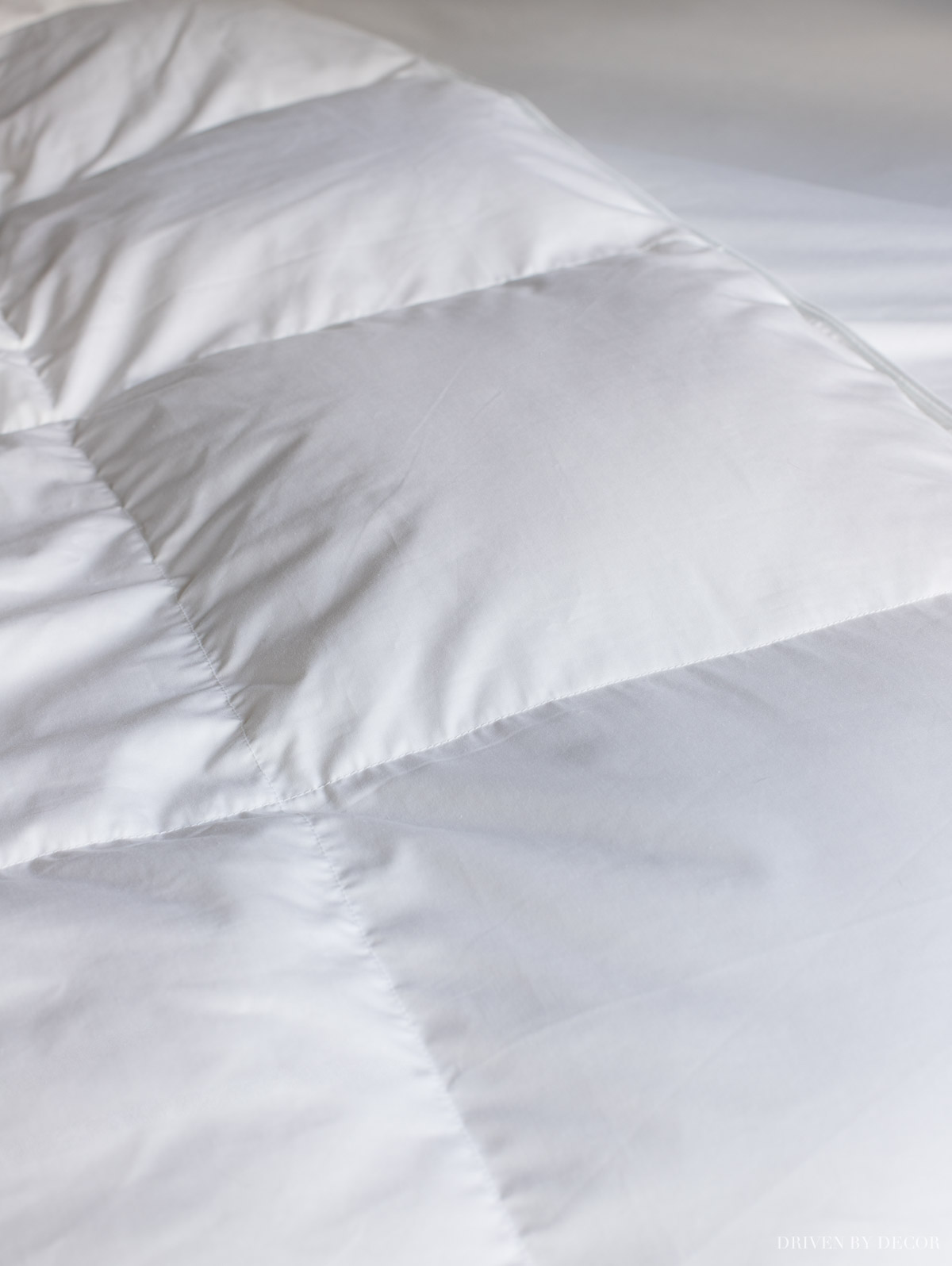 In comparison, with sewn through construction, the pockets for the down are made by sewing the top and bottom layers on the duvet insert together. This means that there is no fill at the spots the two layers are sewn together and less fill near the sides of each compartment than in the middle.

There’s nothing more annoying than having a duvet insert that ends up bunched all the way down in one end of the cover. They key to preventing this is to choose a duvet insert with tabs/loops on each of the corners. The ties on the inside corners of your duvet cover are knotted around these loops which secures the insert in place: 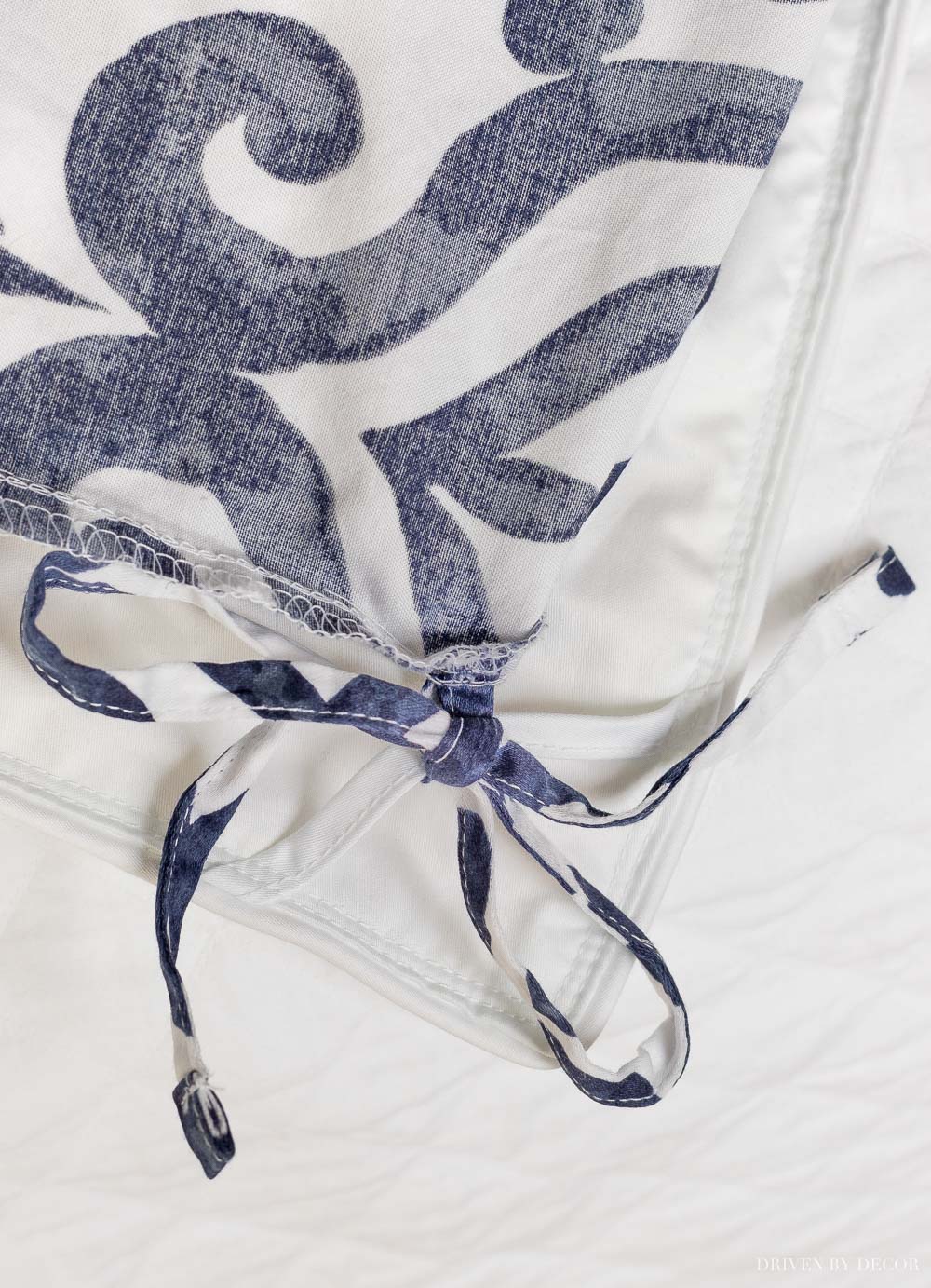 When duvet inserts don’t have corner loops, you just tie the duvet cover around the corner of the entire insert and (1) it often eventually slips off and (2) it makes the shape of the corner all wonky.

I’ll share a quick tip of something I do with the corner ties too! You know how sometimes it’s a pain to figure out which way a duvet insert should go in the cover when you’re putting the two back together after washing (especially queen sized beds where the length is so similar to the width)? I mark the matching corner loop of the insert and the ties of the duvet cover in one corner with a dot of permanent marker so all I need to do is match those back up to know that I have the duvet insert positioned in the right direction.

5. A Duvet Insert that Matches the Size of Your Cover

An incredibly annoying thing about duvet inserts and covers is that there is no standard size for them. Different brands make their duvet inserts and covers different sizes and if you get an insert that’s smaller than your cover, you’ll have extra fabric around the edges and it’s not going to look right. I made this mistake several years ago, buying a pricey duvet insert that had all the right features except… I didn’t check the size and it didn’t fill my duvet cover and looked horrible. Ugh.

So what size duvet insert should you look for? One that’s the same size as your duvet cover or just 1-2″ larger in each direction. It’s super easy with The Company Store because my duvet insert is the exact same size (90″ x 96″ for queen) as my duvet cover 🙌🏻. I snapped this pic before putting my duvet cover over my insert and you can see that they match up perfectly and that both are nice and generously sized! 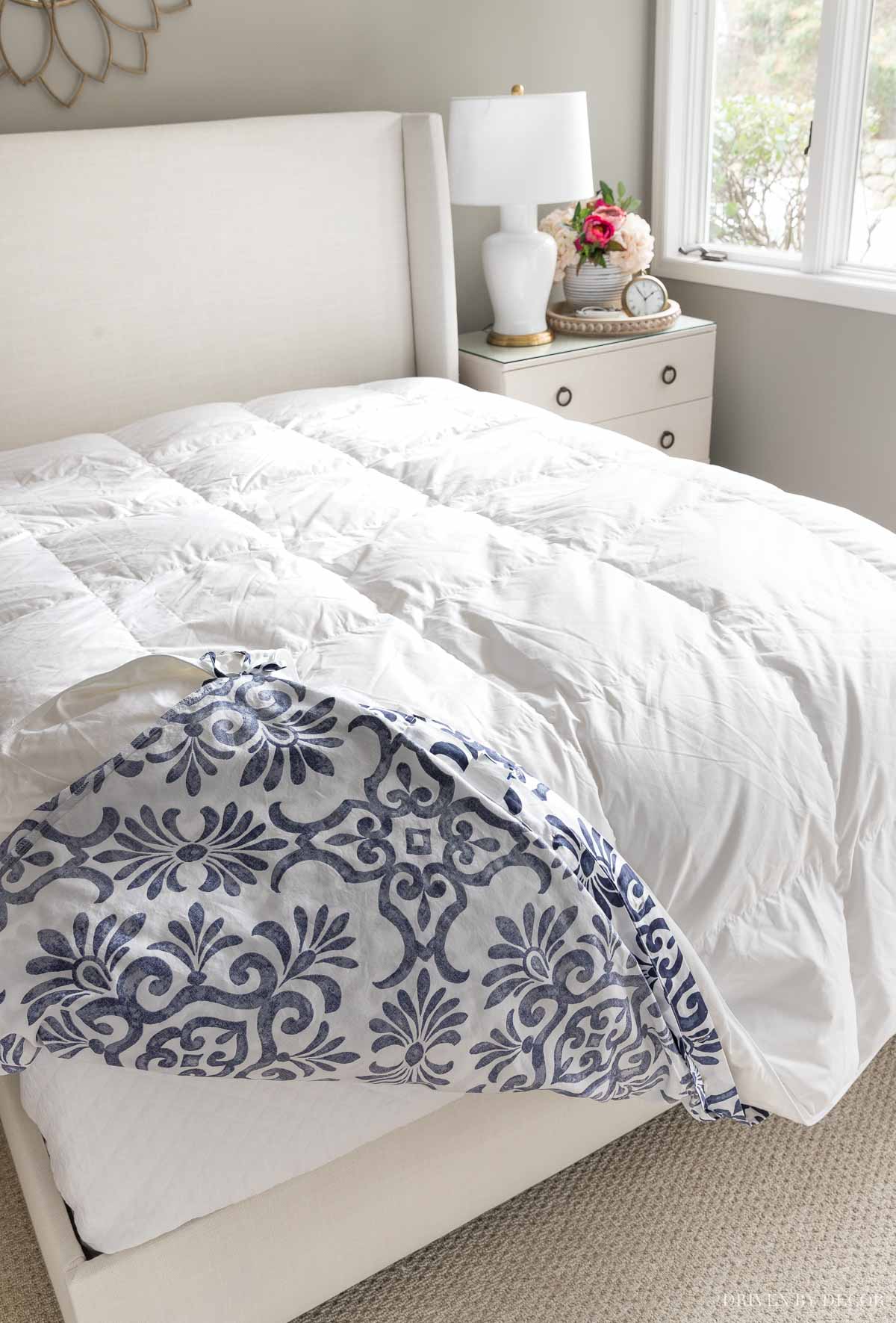 As I side note, if you haven’t mastered putting your duvet insert into the cover, I’ll quickly share how I do it. Just place your duvet cover inside out with the opening toward the bottom of the bed, layer the insert on top of it, and tie the cover to the insert at all four corners (as shown above!). Then starting at the head of the bed, roll both the insert and cover together toward the foot of the bed: 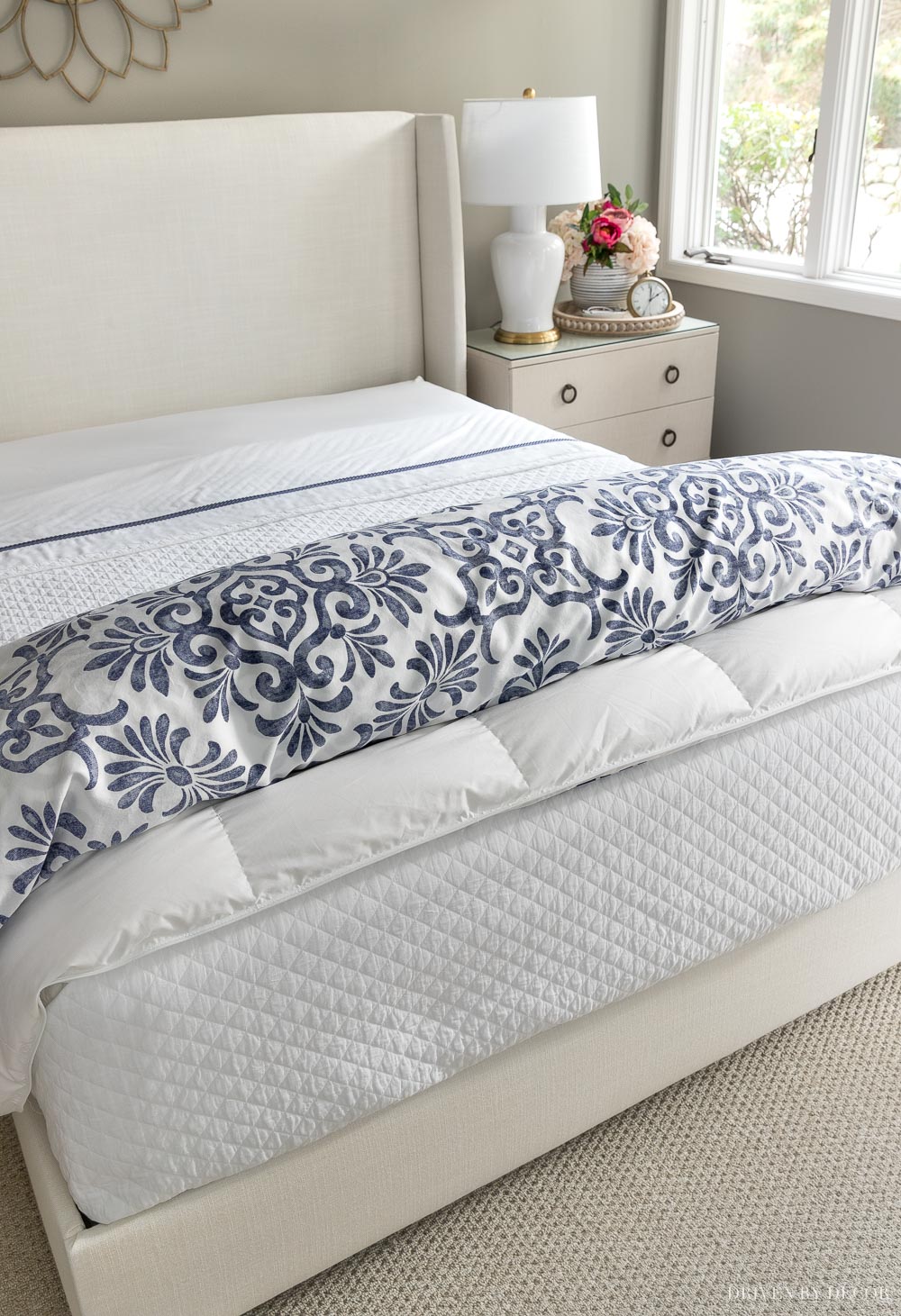 Once you’ve rolled it all the way to the end, at the opening to the duvet cover, fold the cover around your rolled bundle until you have a little bedding burrito like this: 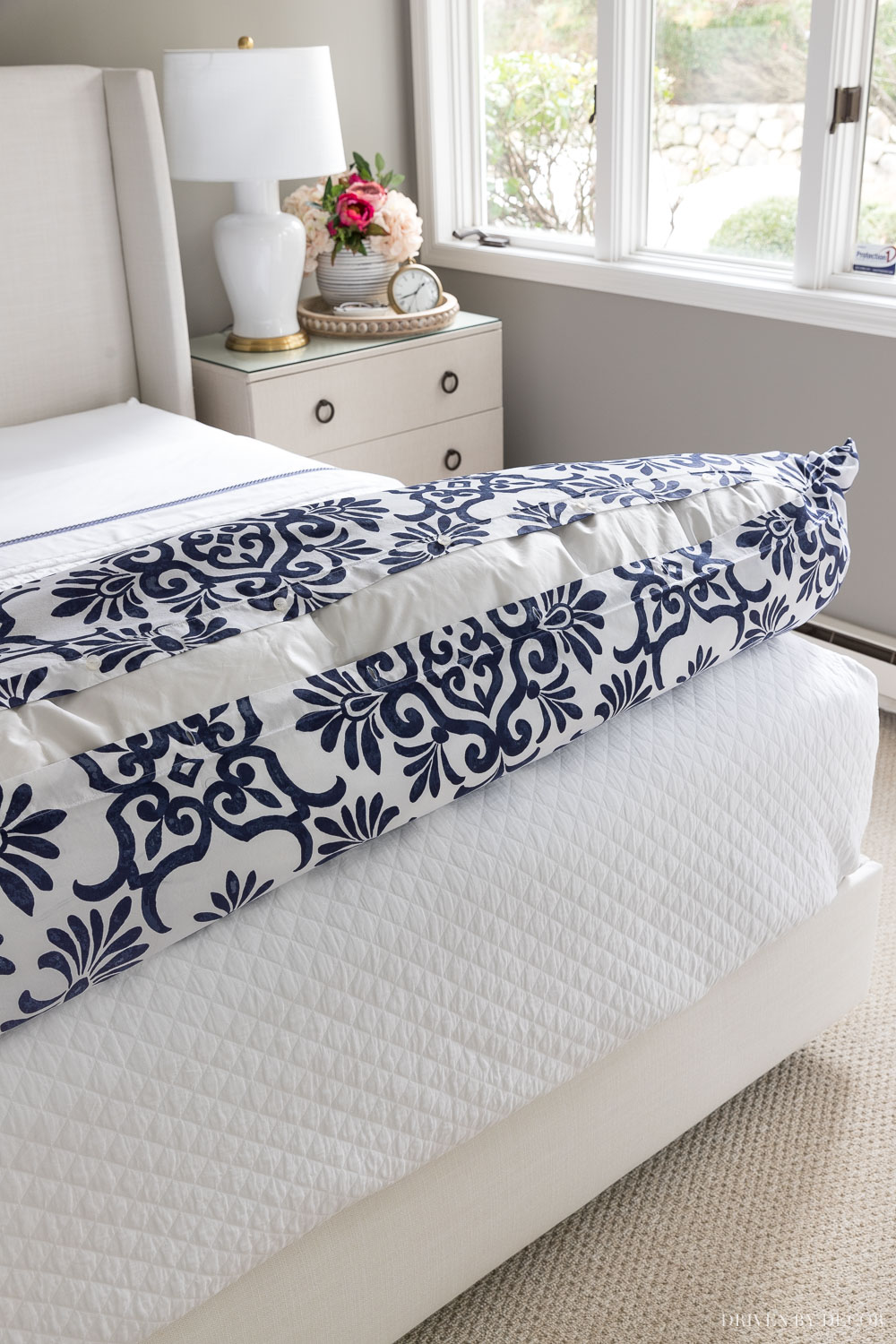 Then simply button it closed and unroll it towards the top of your bed. 🙌🏻 There are lots of different options for how you can lay your duvet on your bed – I typically fold it back toward the foot of the bed so that it’s stacked in three layers: 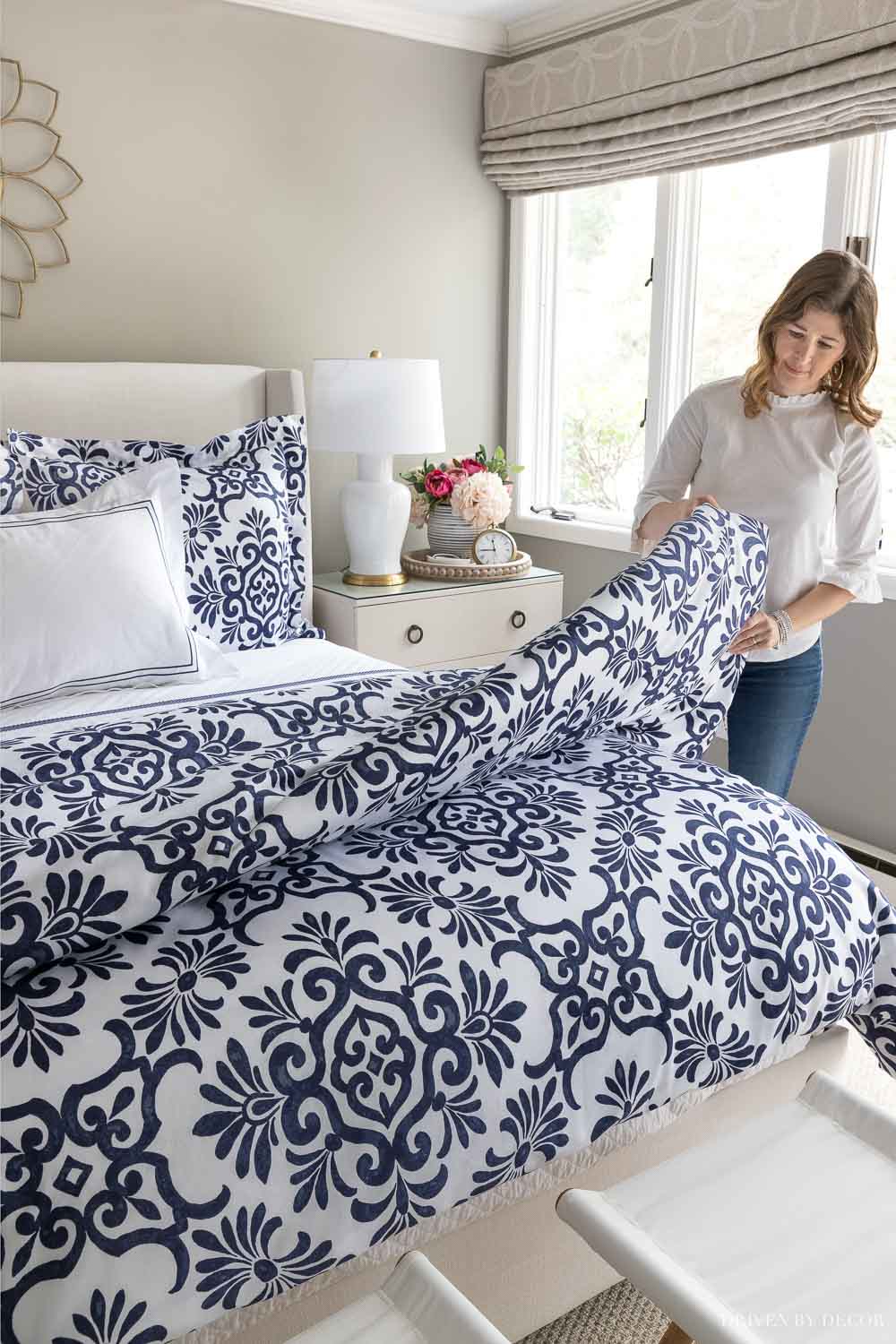 Now back to choosing duvet inserts.. two last things I look for when shopping for the best duvet inserts that are (6) machine washable (some are dry clean only and I like to be able to throw mine in the wash if needed) and (7) that they come with a warranty or guarantee. If you’re buying a high quality duvet insert, they aren’t cheap – they’re investment pieces that should hold up for years and you want a brand that will stand by their products.

All of The Company Store’s down and synthetic down duvet inserts and comforters have a lifetime guarantee that you can read more about {here}. Several of you told me that you’ve had frustrating issues with other brands with a ton of feathers leaking out of your duvets – that’s not an issue I’ve ever had with The Company Store’s inserts (even after years of use) plus excessive down leaking is covered under their lifetime guarantee which is great piece of mind.

Along with {this duvet insert} (or {this ultra premium insert} if you have the money to spend!) my other favorite picks from The Company Store are {this navy & white duvet cover} with {these matching Euro shams}, {this white coverlet} which washes up so well and is generously sized, 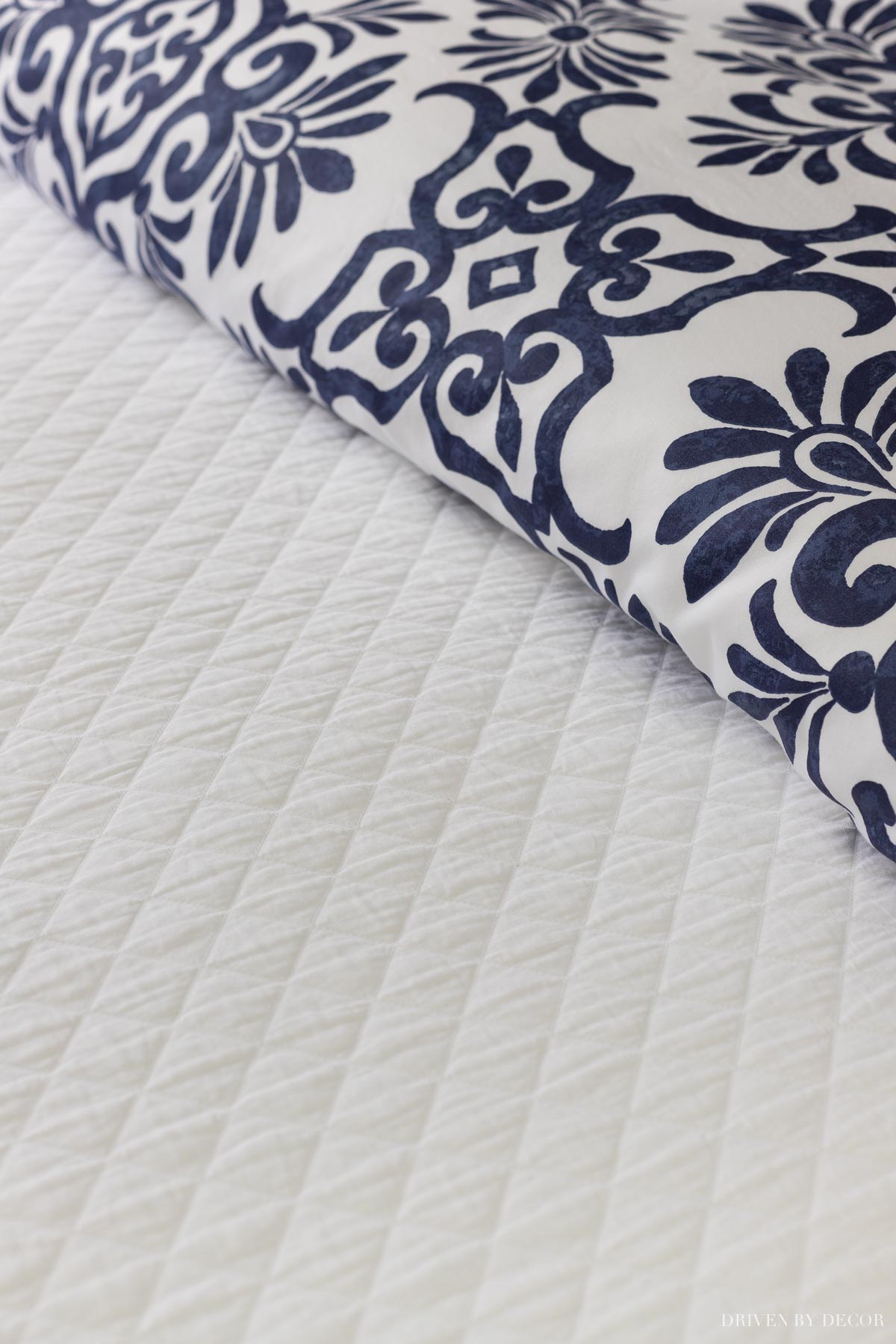 {this sheet set} with the most beautiful embroidered banding on the edge of the sheet and pillow cover (mine is the navy but it also comes with gray or white banding), 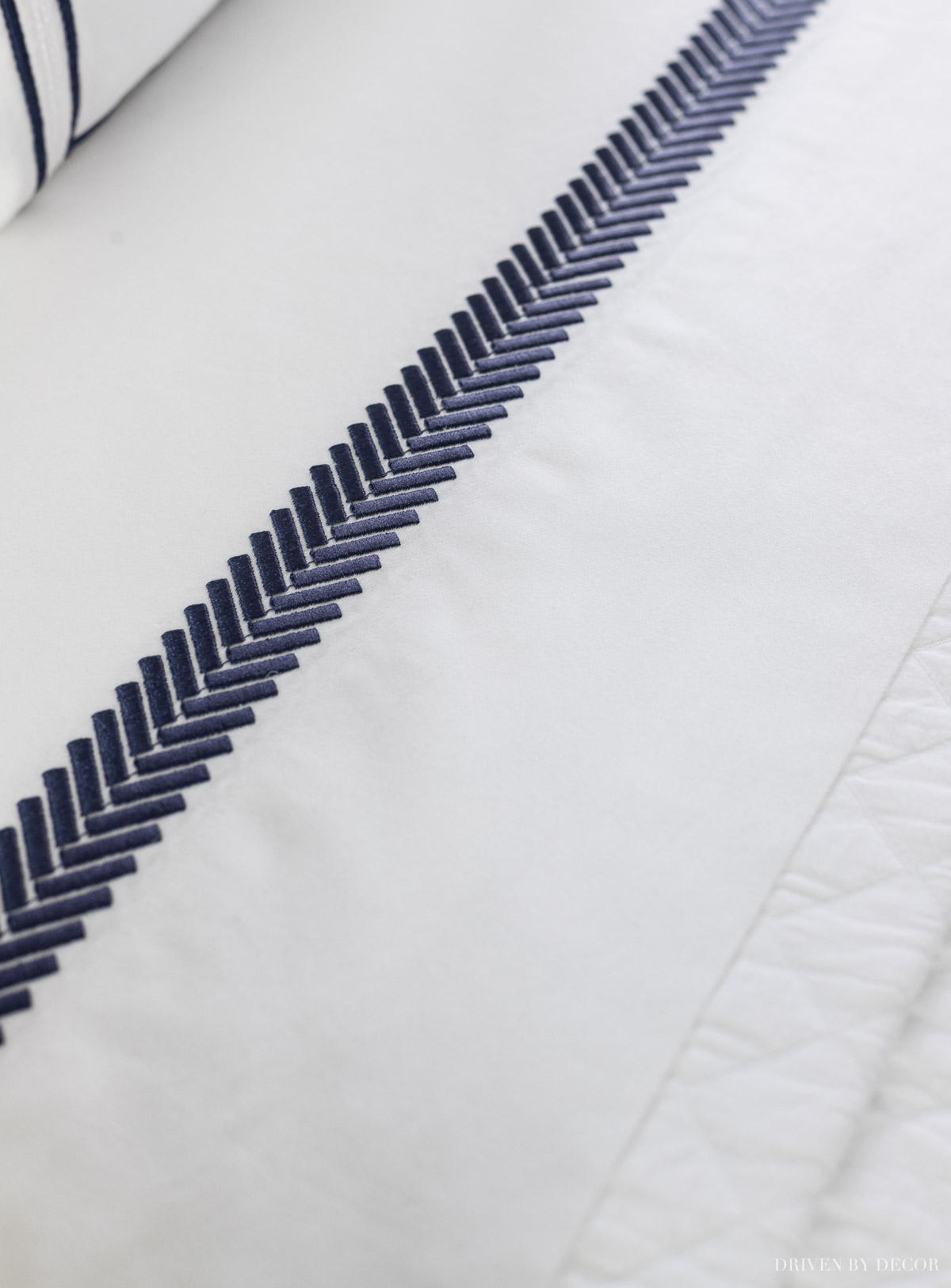 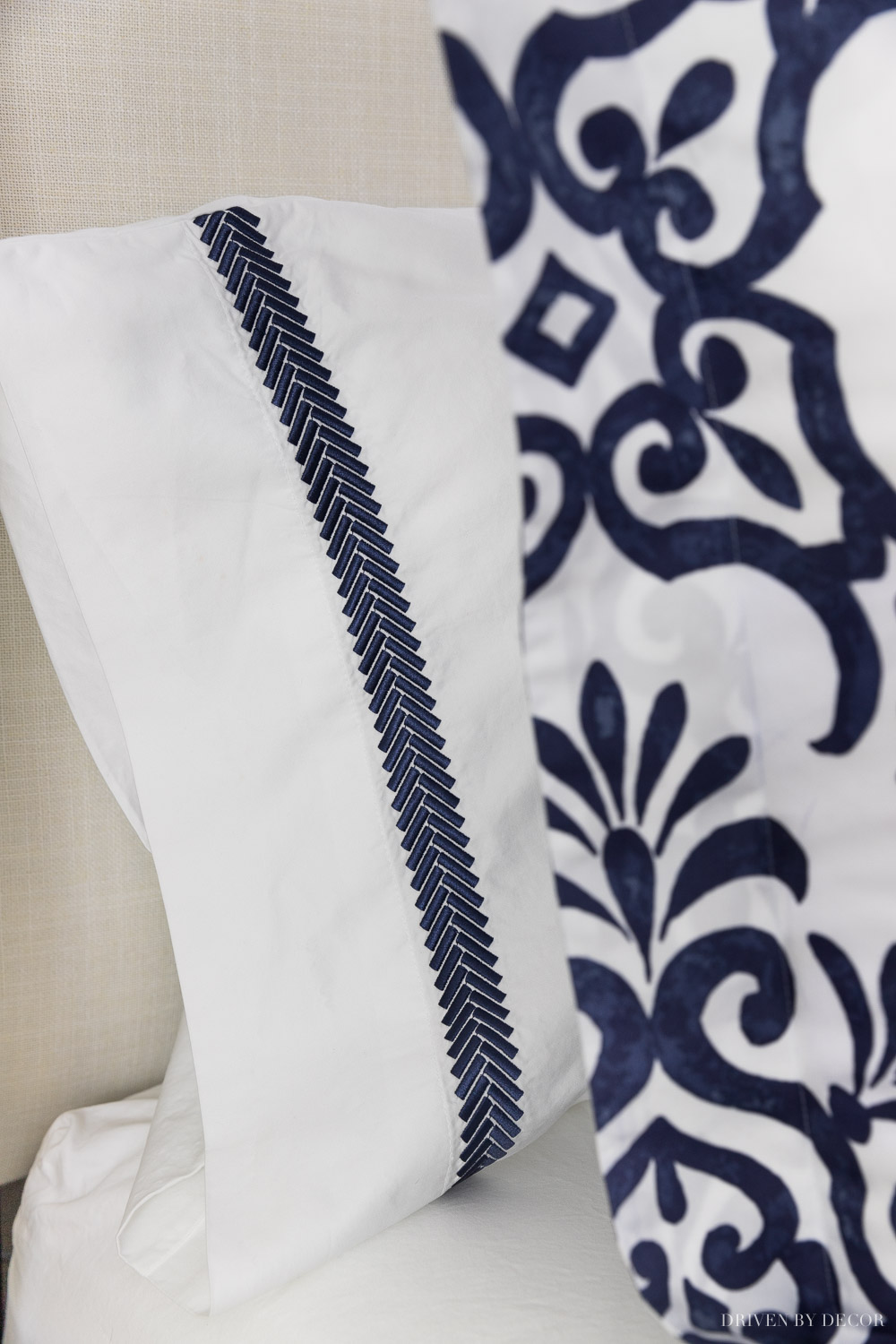 {this cotton blanket} that I LOVE – I always have to have more than just a sheet (even in the summer) and it’s the perfect comfy lightweight blanket: 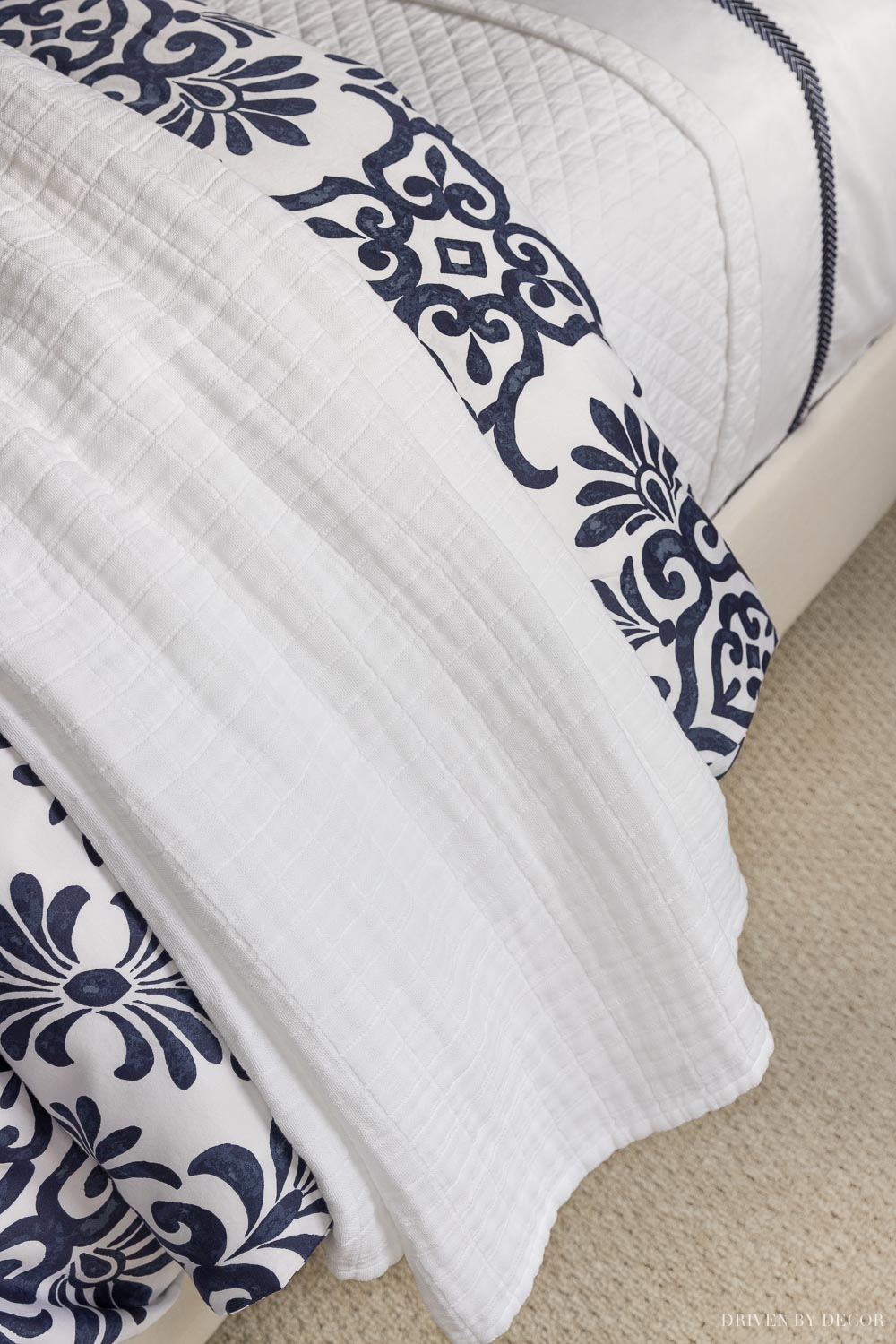 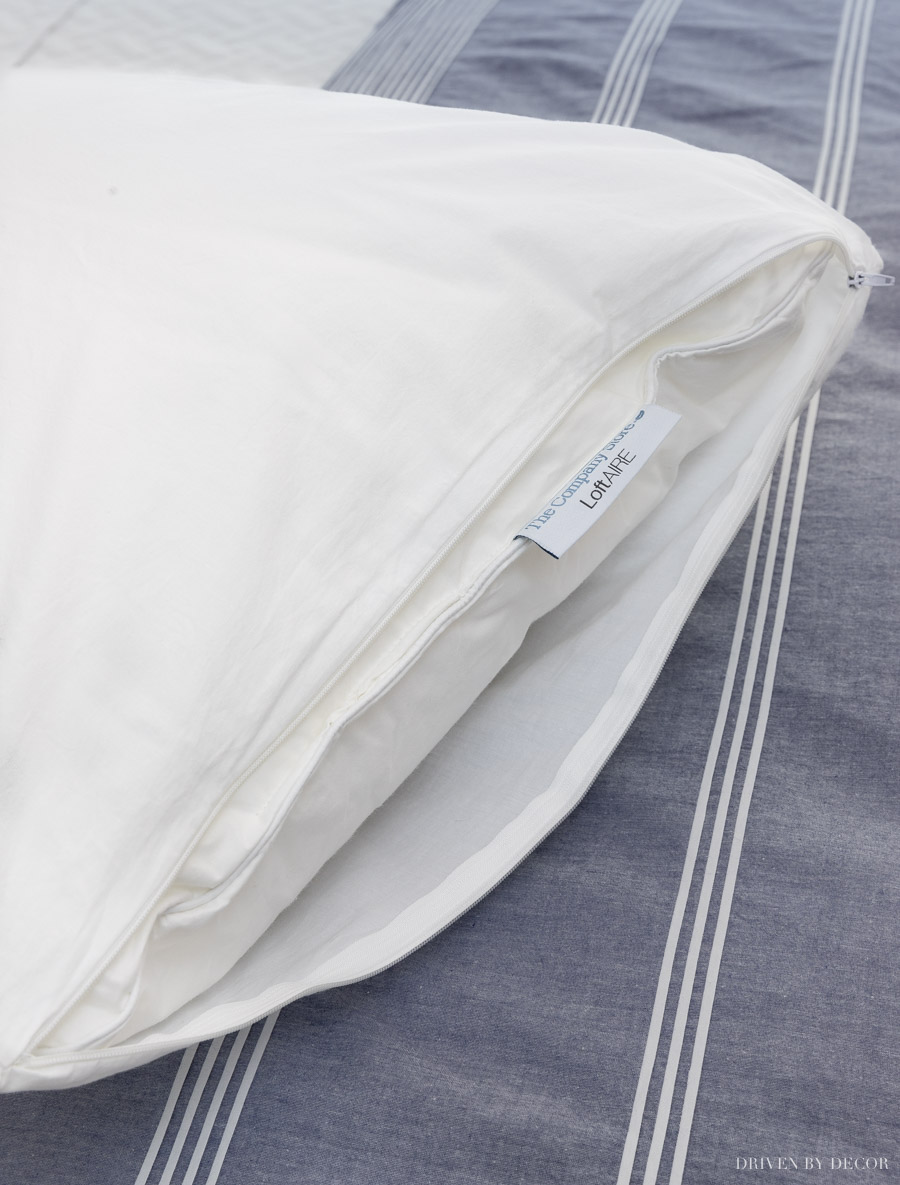 How to Care For Your Duvet Insert

If you have an awesome fluffy duvet insert you want to keep it that way and extend the life of your purchase right? What about machine washing it – is that ok? First off, read the care instructions on your duvet insert, as some are machine washable while others might require dry cleaning. While you should wash your duvet cover as frequently as your sheets, you should actually only need to clean your duvet twice a year. Washing it really frequently will actually shorten the life of your insert.

If using a washing machine, make sure you have a large washer that fits your insert (which might mean a trip to the laundromat!). Tumble dry your insert on low heat – I’ve found that throwing several wool dryer balls in the dryer helps keep your insert from bunching up so it dries faster. Often after drying in the drier there are still a few damp spots so lay out the duvet insert on a bed or line dry it before putting the duvet cover on it.

Want more details on creating a cozy bed? Check out {this bed making 101 post} that walks you through what I put on our beds layer by layer! Thanks as always for stopping by the blog!