On the hunt for a small bathroom vanity? I’m sharing my 12 favorites in today’s post!

Today I’m giving you a peek at the projects going on at our house in NC, sharing my 12 favorite small bathroom vanities, and giving you details on a gadget that’s the most genius solution for outlets buried behind furniture. Let’s get to it… (affiliate links included in post – full disclosure statement available {here})

I spent the last two weeks at our North Carolina home trying to get a few projects knocked out to pave the way for refinishing our hardwood floors next month – total domino effect going on here! While we all love a good “before” and “after”, sometimes there’s a whole lot of ugly that goes on between the two 🙈. I keep hearing from you guys that you’d like to see more of the in-between progress so thought I’d share some of that with you today.

Project #1 was to remove four interior columns that were purely decorative a la 1990s style. It included these two columns between our living room & entry (this is a pic I snapped right after we closed on our house): 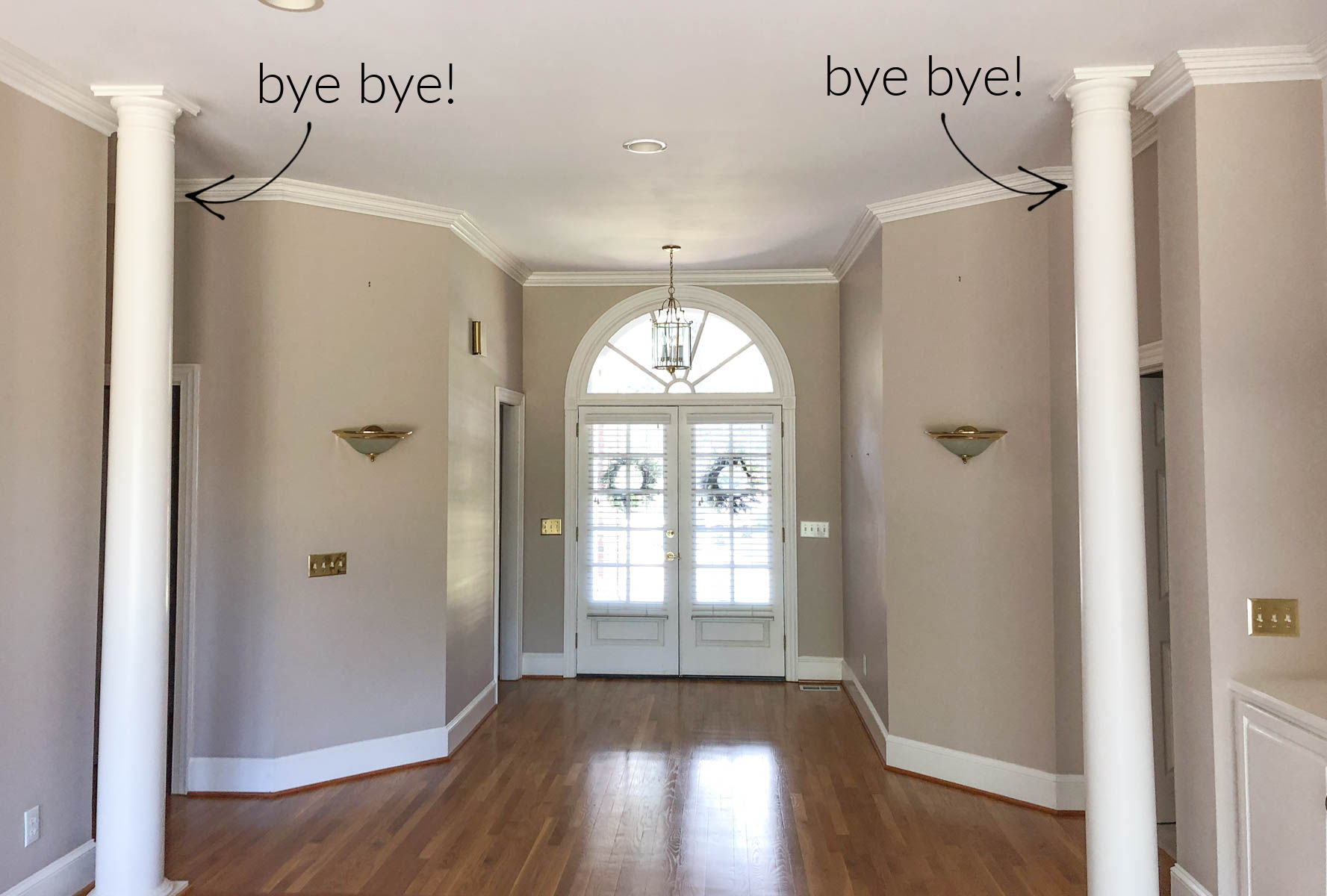 and two more between our living room and dining room. If I was ever going to have them taken down it needed to be before we refinish the floors since once they were removed, 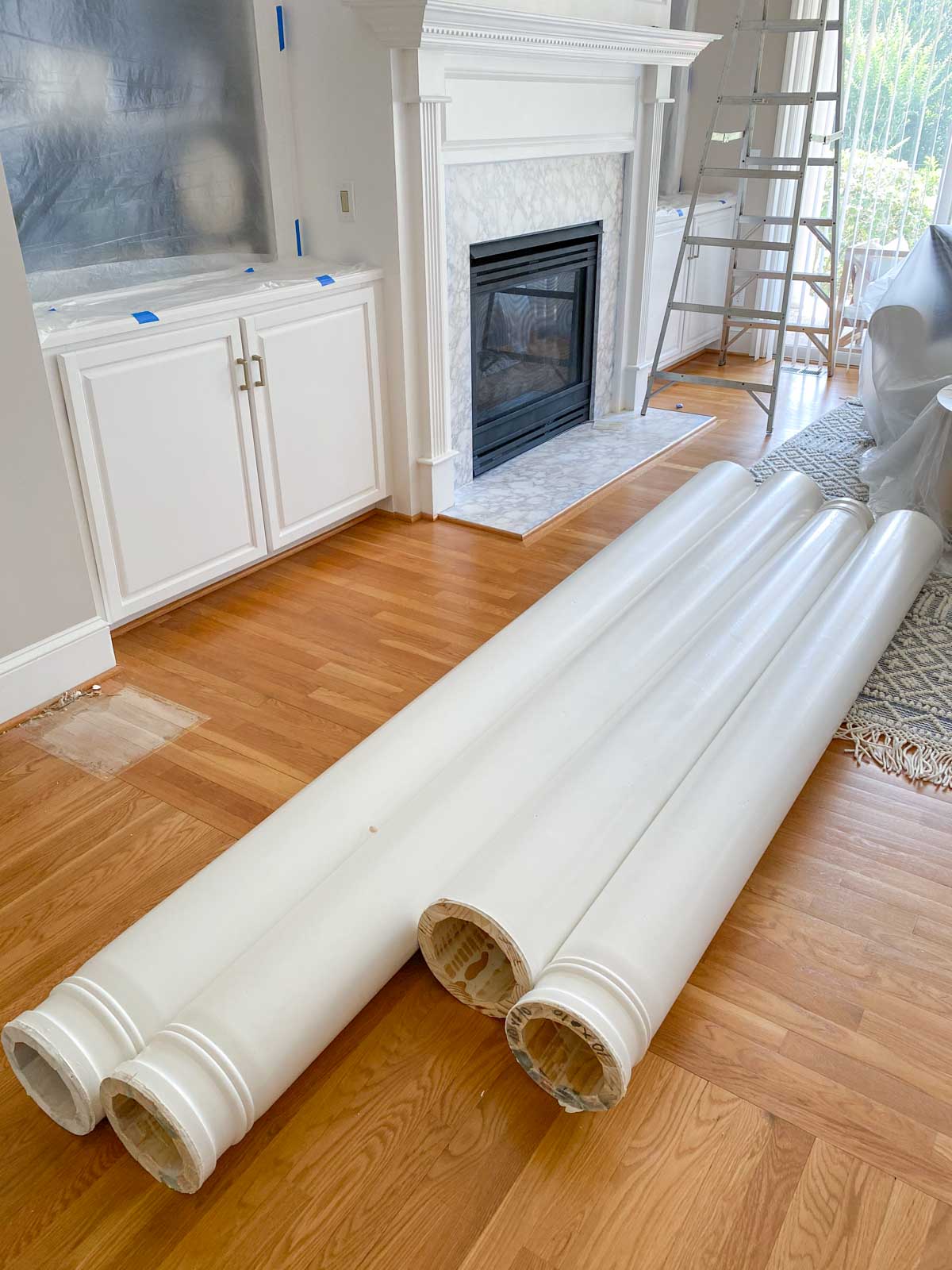 I knew there would be squares of unfinished hardwood where the column bases once stood: 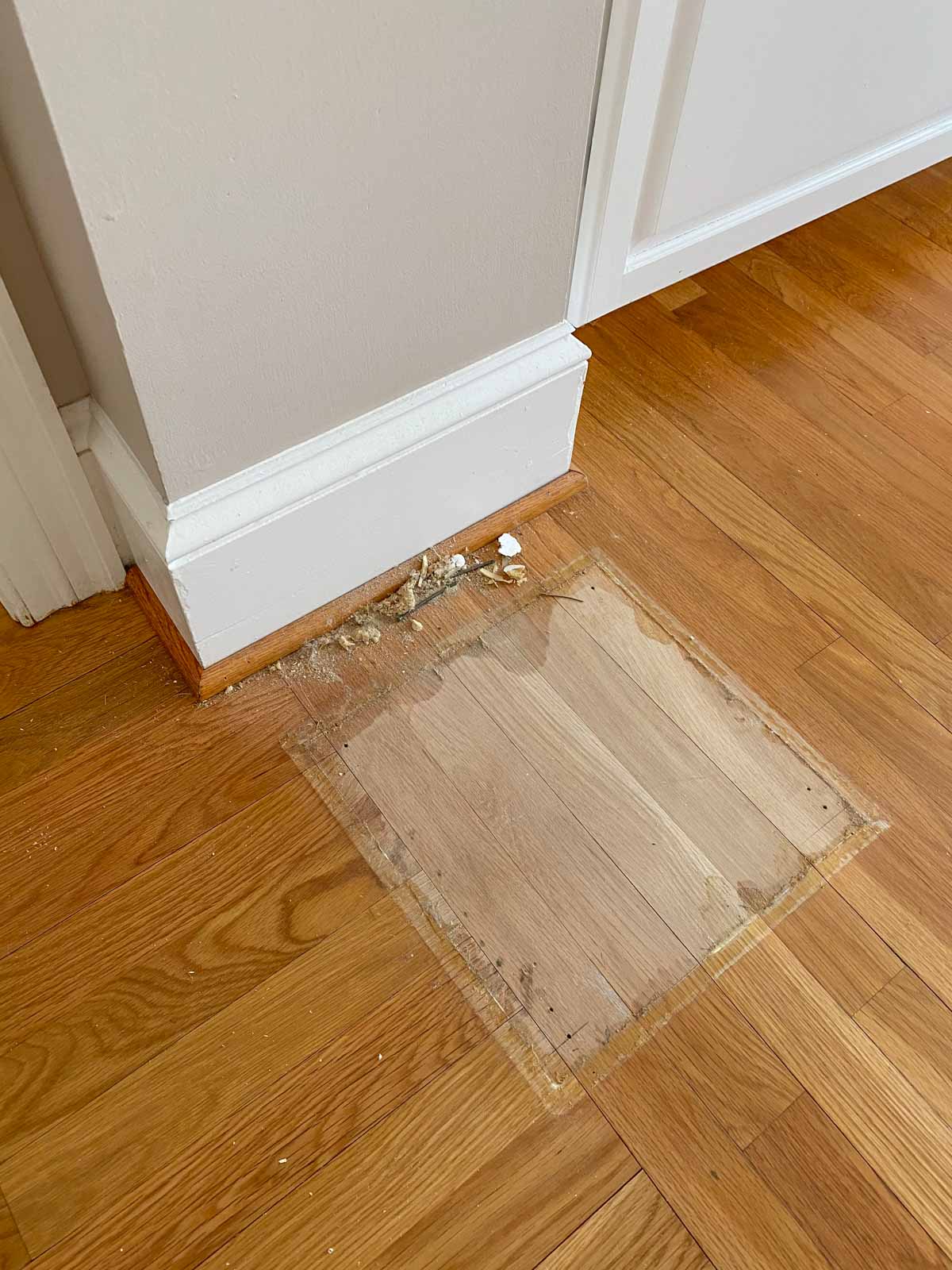 Project #2 was removing the decorative arch over the two columns that had been dividing the living and dining rooms. While I love arched openings, this one made the two spaces feel choppy and I was ready for it to hit the highway for a more open, airy look: 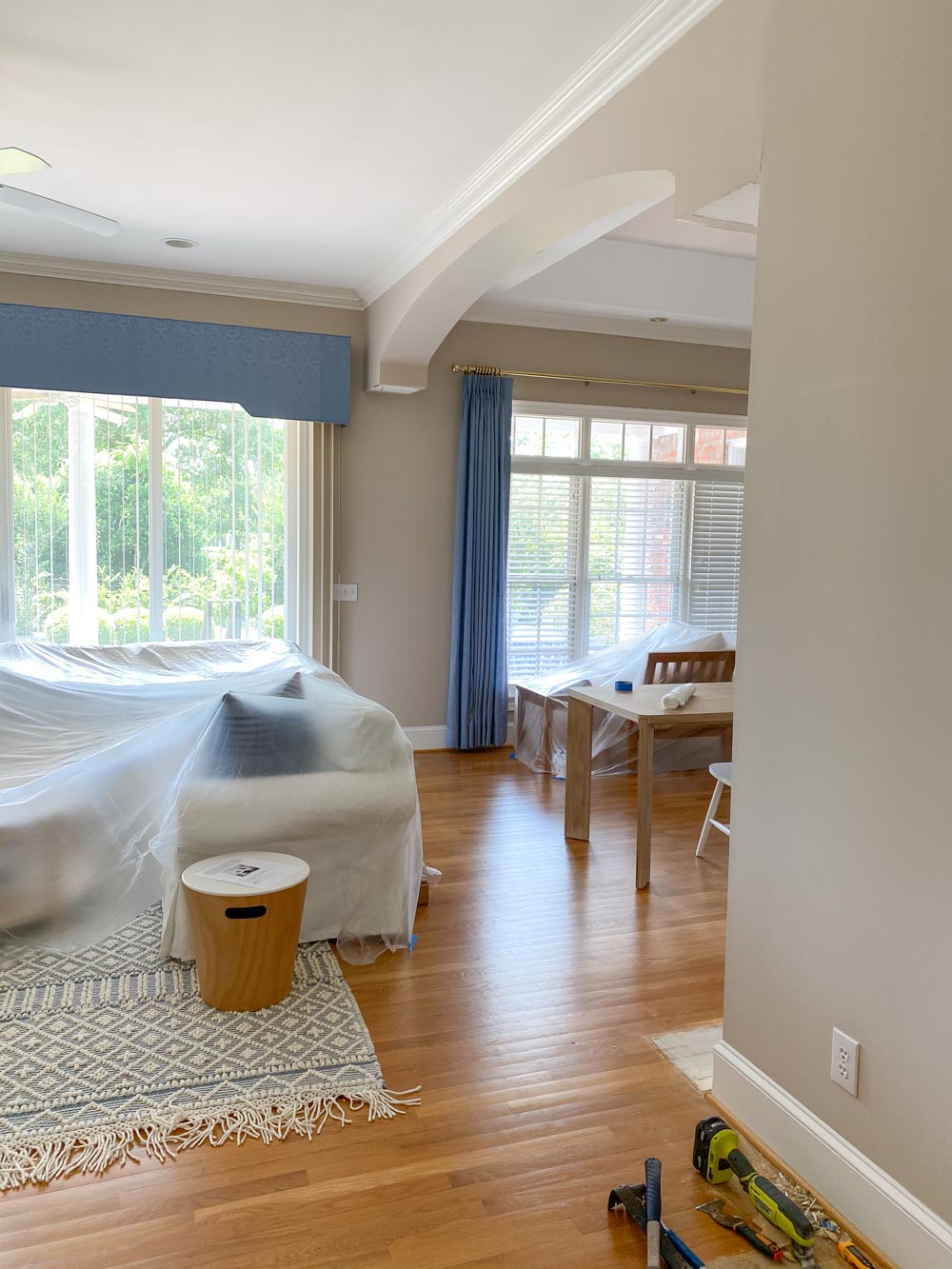 There’s still some patch work to do but it already feels so much more spacious: 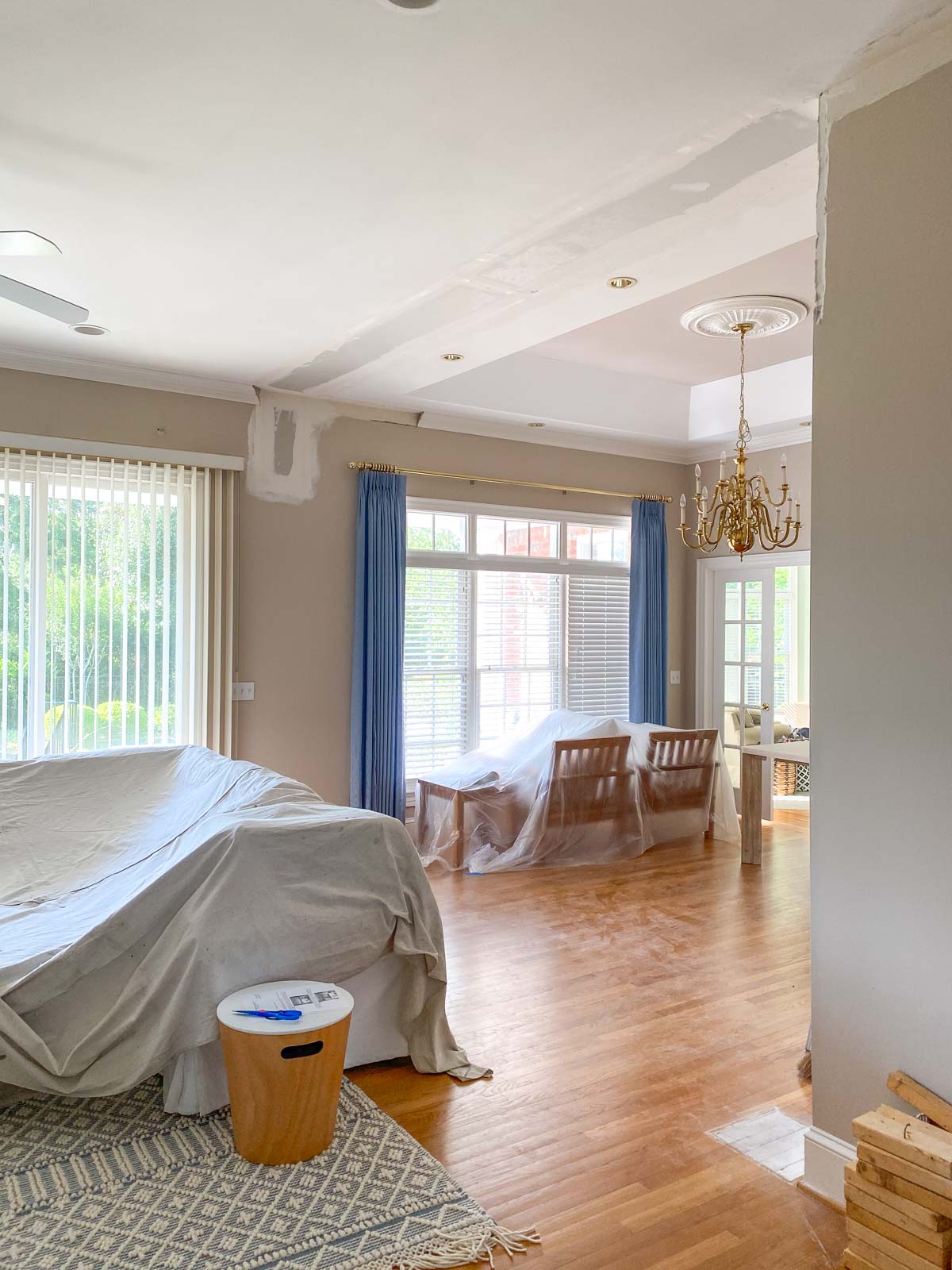 Project #3 is the start of a fireplace makeover – I want to redesign the face of our fireplace to something a little more modern and clean-lined including lowering the mantel height so we can mount a TV above it (I’ve never been a huge fan of TVs over the fireplace but it’s really the only spot for it in this room). This is also a needed-to-be-done-before-the-floors-are-refinished project since the footprint of the new fireplace face will differ from that of the old one. Also, I wanted to remove the hearth and run the hardwoods all the way up to the fireplace (a hearth isn’t required with my gas insert) to create an easier walking path in front of it than there is now.  My contractor did an awesome job carefully peeling off the layers – that whole front panel above the mantel was just a thin wood sheet that popped right off: 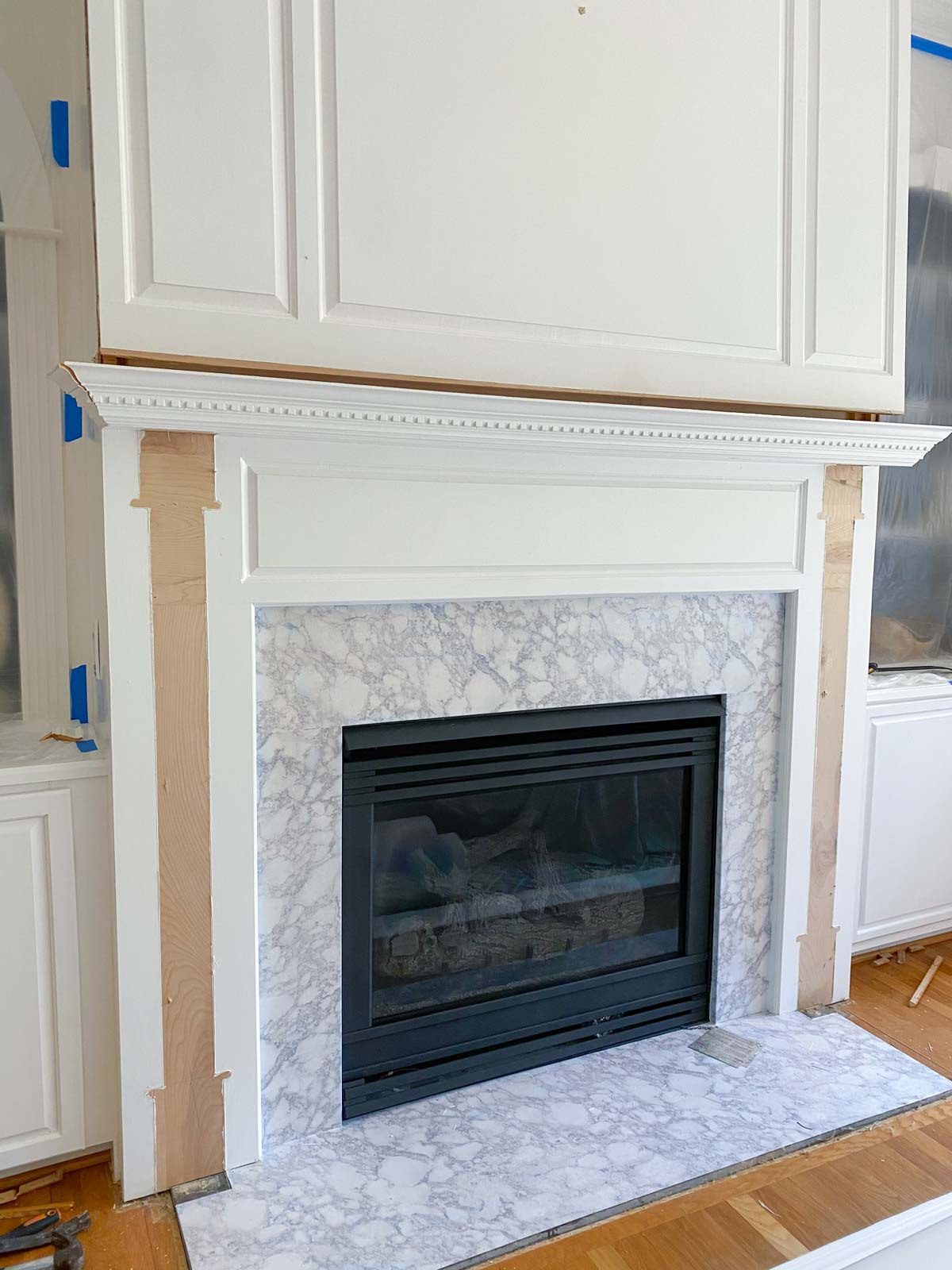 So now I get to start with a new design from scratch!: 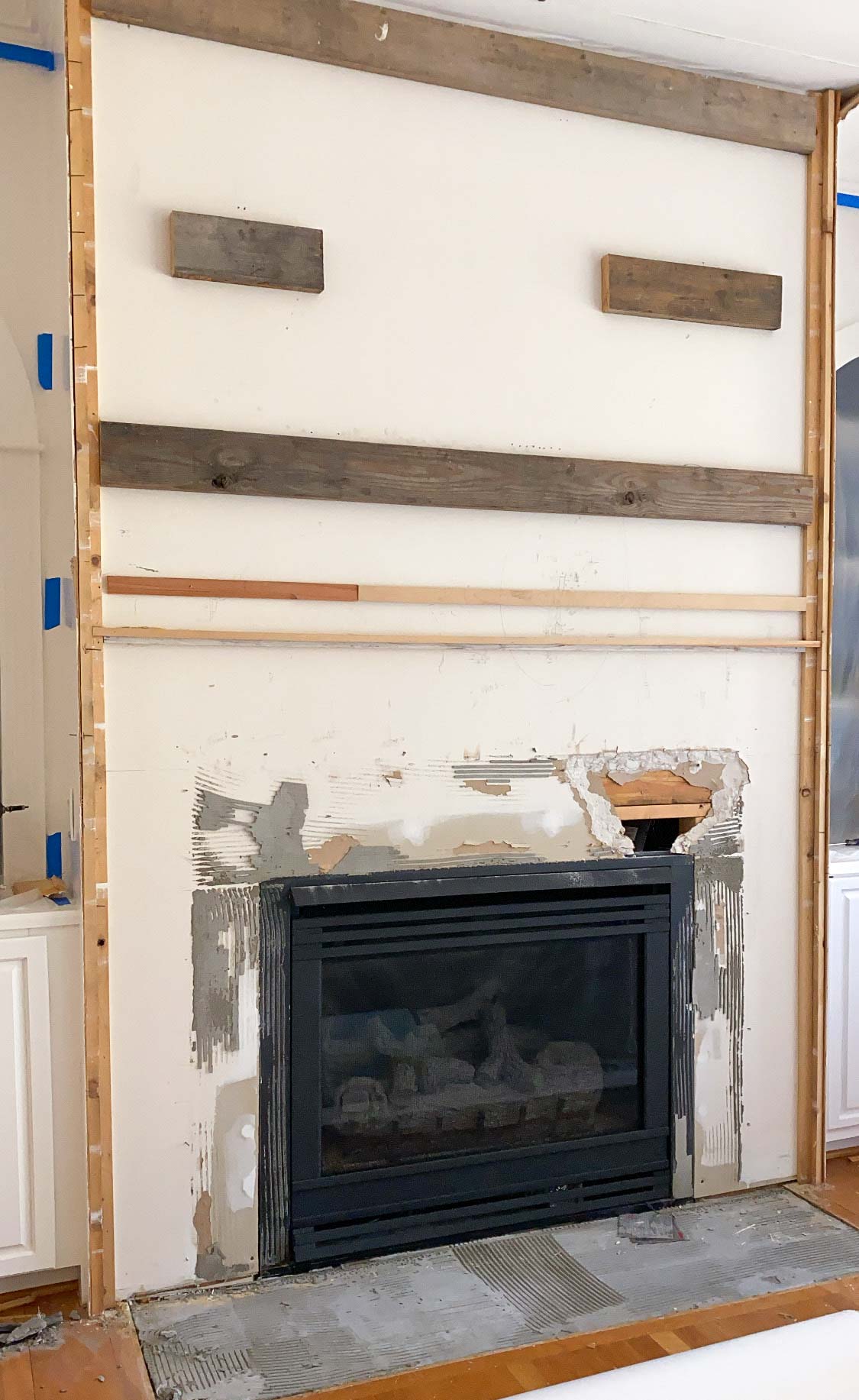 I’ve got my new design all sketched out and am anxious to get going on it but am on hold until we can get the fireplace company out to look at it (they are booked weeks out!) because I want to update the face of our fireplace insert first if we can.

And the last domino that has to fall before we refinish the floors? We’re going to have to remove the toilet and pedestal sink in our powder room before the refinishing is done so I figured that it was a good time to swap the pedestal sink out for a small vanity. Our current pedestal sink is dated and not very functional either because if you have even the skinniest soap pump on it, you can’t turn the faucet handle on and off without it being in the way: 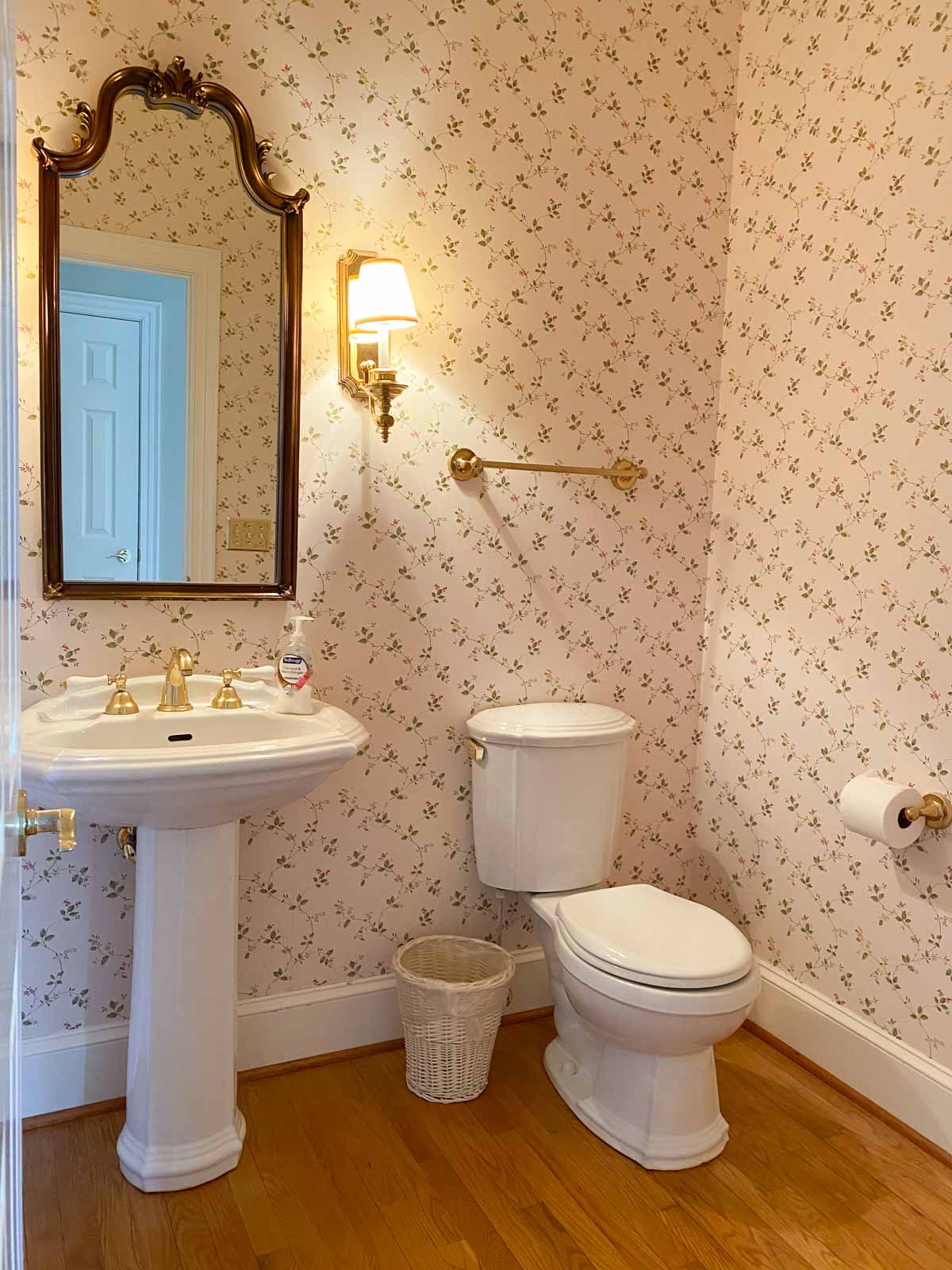 I’m still debating which vanity I’m going to replace it with, but I’ve done a lot of searching and gathered together these favorites: 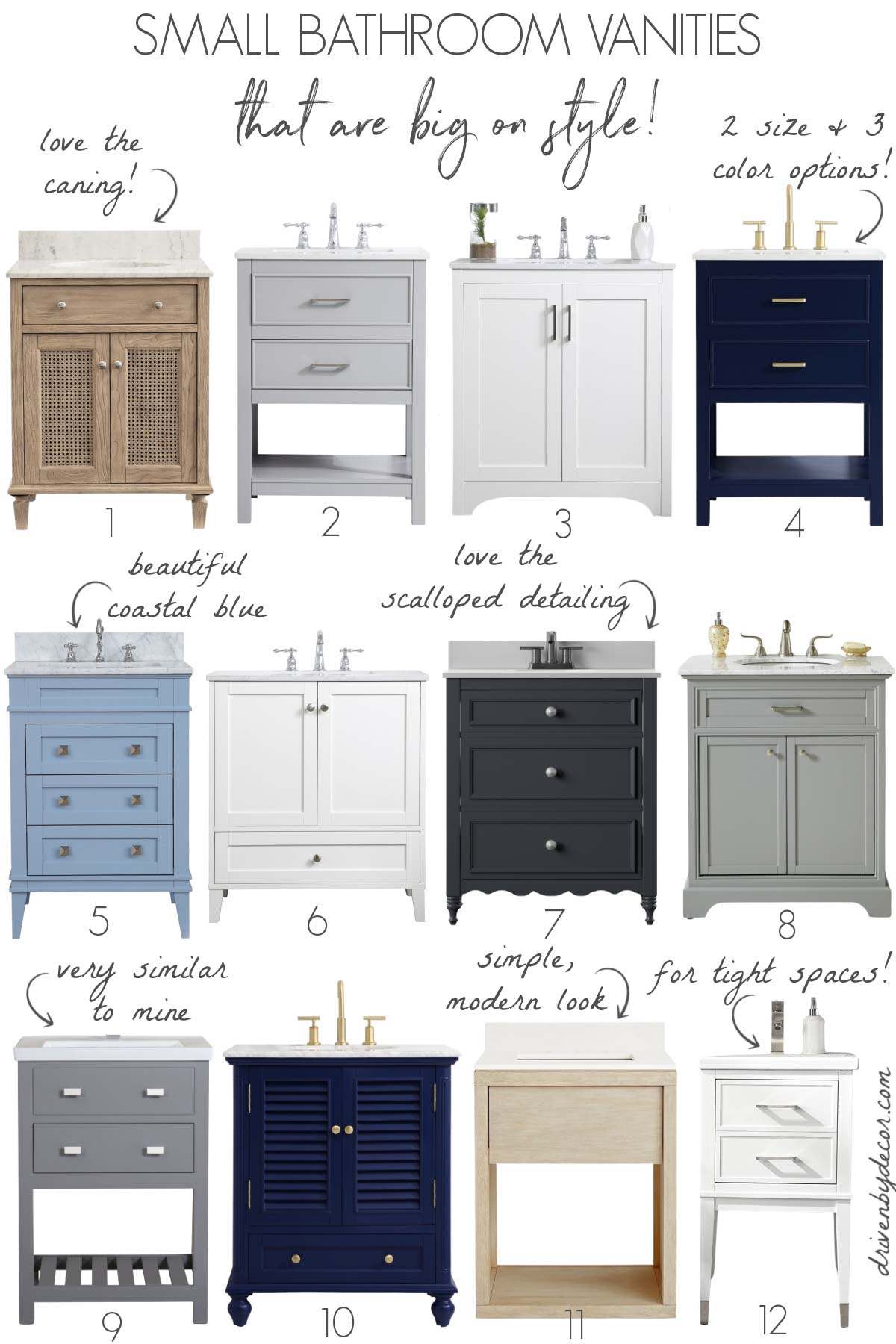 I also knocked out some serious carpet shopping since our bedroom carpeting needs replacing pretty badly! I think I found “the one” (it’s Karastan’s Cambridge Manor in English Toffee) – here’s a sample of it laid over the worn & stained carpet that’s currently in there: 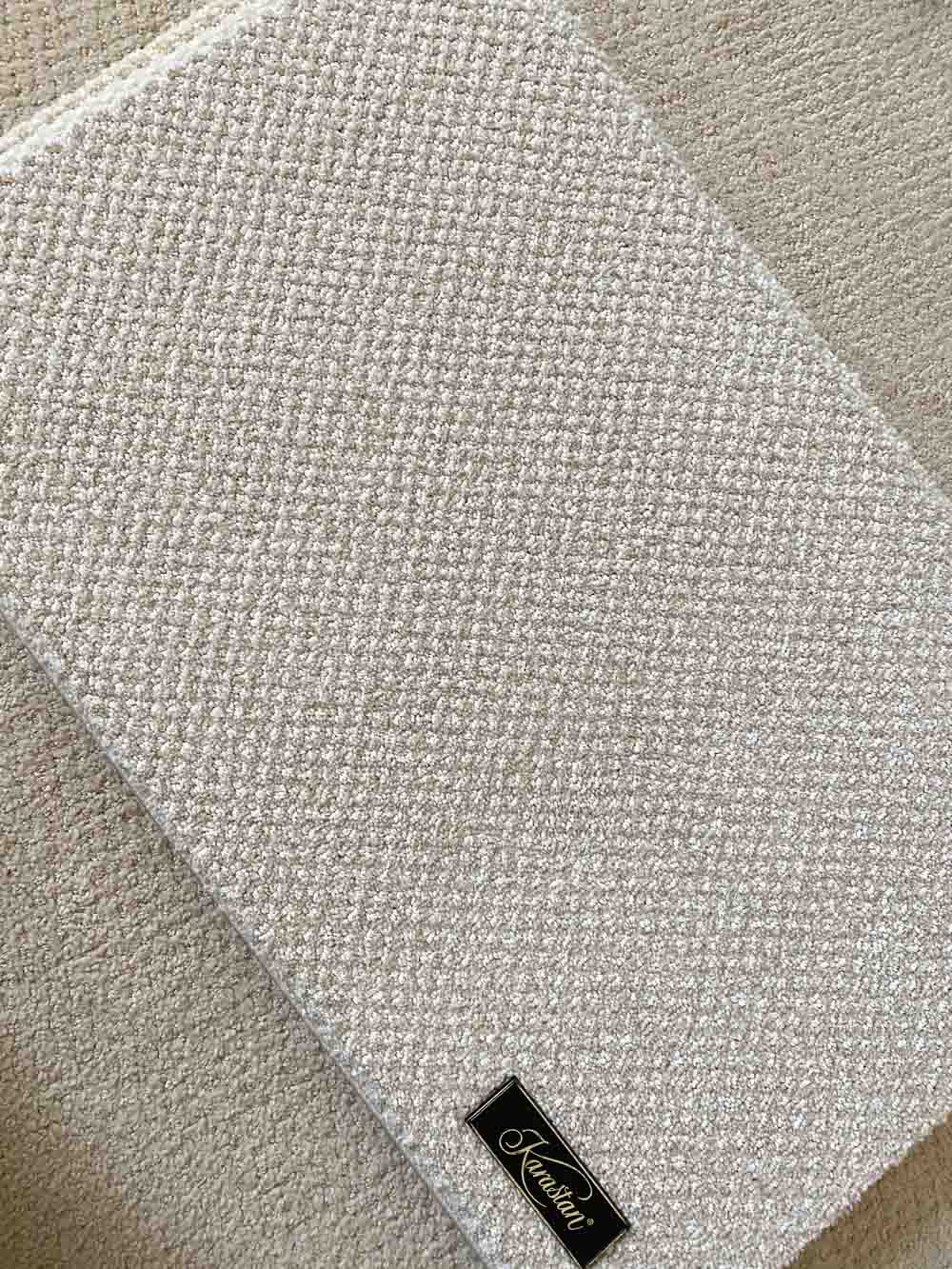 Plus I made some progress on figuring out the design for our master closet – more coming on those projects in a later post! If you’re newish here and wondering why we have this home in NC that we’re fixing up – {this post} that I wrote in 2019 after we bought it shares all the details on our plans.

I also wanted to share a favorite new gadget! Have you ever had something plugged into an outlet behind a piece of furniture that prevented you from pushing your furniture flush against the wall? And it’s hard to access an outlet behind furniture too. I have both issues with the dresser between the two beds in my girls’ room but recently found the simplest gadget that totally solves this problem! It’s {this ultra-thin outlet cover with power strip}: 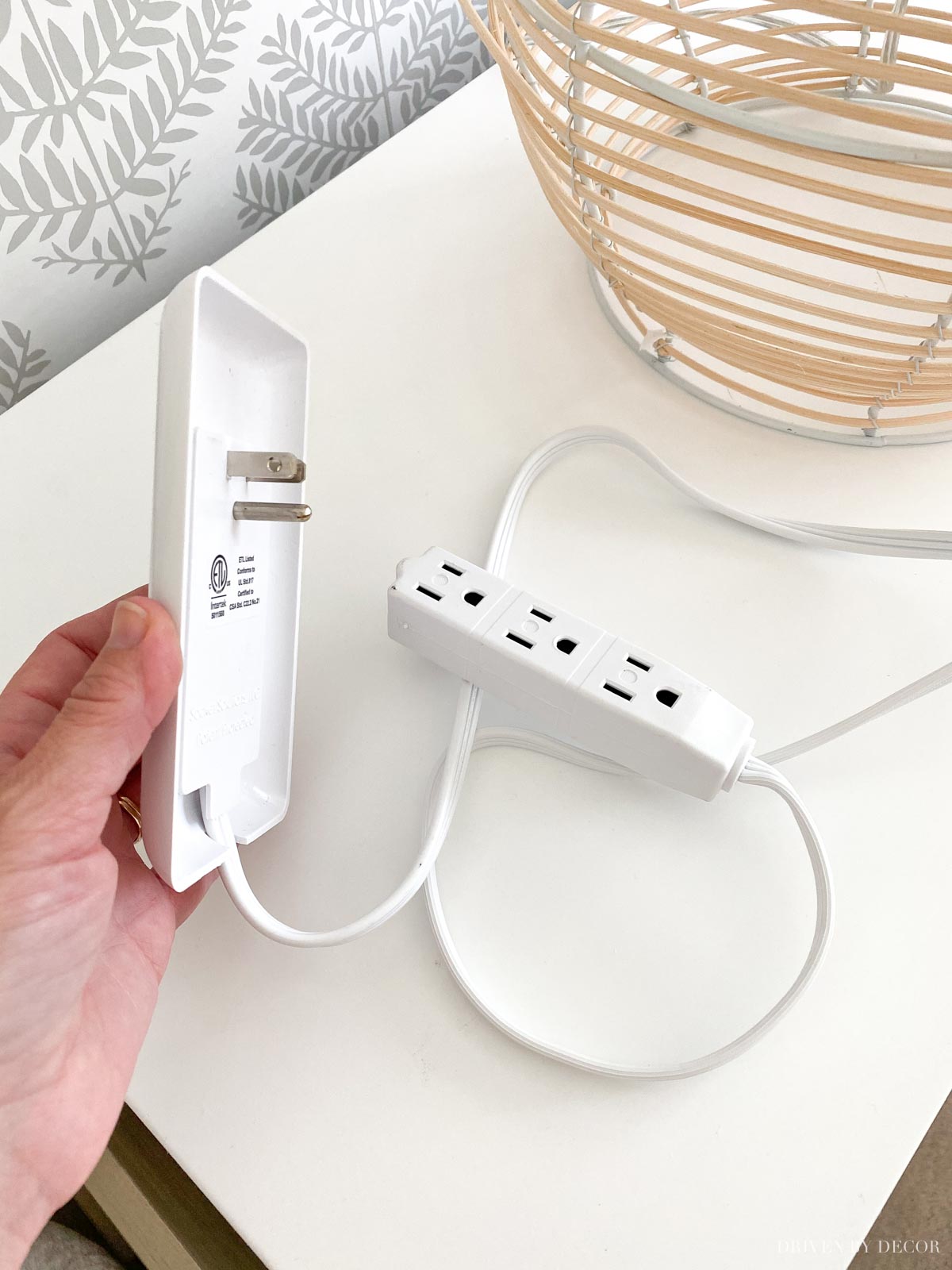 You simply plug it into your outlet and since it’s so thin, you’re able to move your furniture back so it’s almost flush against the wall. The other benefit is that we now have three outlets instead of two and they’re all easy to access! If my girls want to charge their phones or need an outlet for their laptops, they can just grab the power strip from under their dresser instead of trying to get to the difficult-to-access plug behind it: 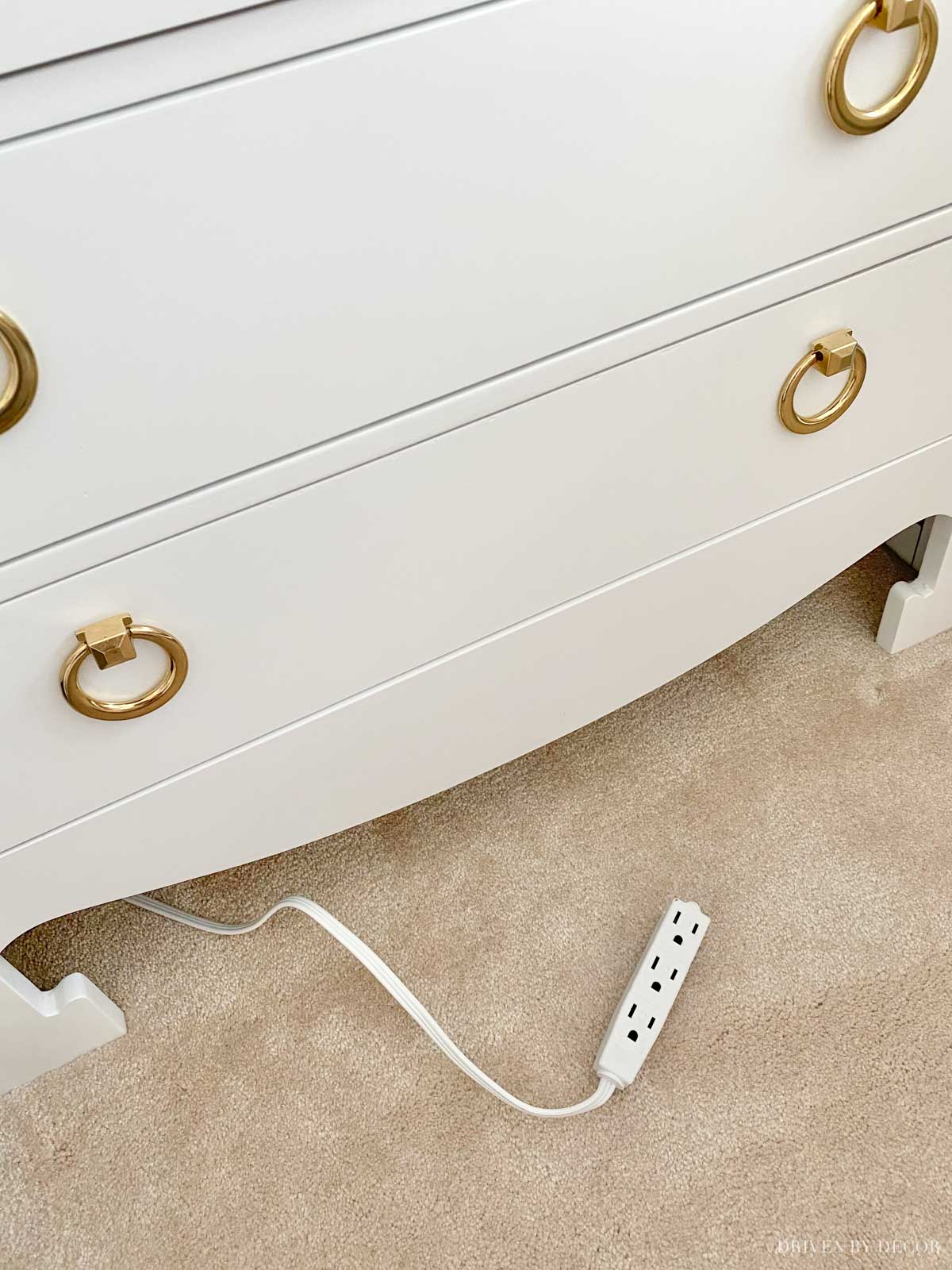 It’s about as simple as it gets for “installation” since all you do is plug it in. So if you have the same outlet issue, just do it – you’ll be so glad you did!

Thanks for stopping by the blog today!